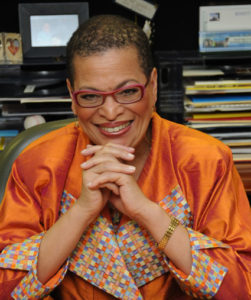 Restaurants, museums, libraries, gyms, and bars are closed.  So are schools, from K-12 to higher education.  Classes will be conducted online or not at all.  A local vendor told me her receipts were down by 85 percent, and she hopes not to close before the “national emergency” is over.  Our streets are deserted, with some cities asking people to “self-quarantine”, or in the words of several mayors, “stay home unless it is urgent.”  The shutdowns have impacted our economy.  Consumer spending is more than two-thirds of GDP.  If people aren’t working, people aren’t spending.

Treasury Secretary Mnuchin estimates that unemployment will rise to a scary 20 percent, just a bit lower than depression rate unemployment levels.  And when America gets a cold, Black America gets the flu.  Black unemployment has been twice the white unemployment rate.  That means the Black community might experience unemployment of around 40 percent.  That’s frightening!  Why are Black folks more vulnerable?  We are more likely to work in the service occupations and in the gig economy.  While jurisdictions are exploring the possibility of paying people who cannot work because of quarantines, it is not clear how many will be excluded from this relief.  There are talks of giving everyone with an income under $85,000 a $1000 cash payment.  And then what?

Meanwhile, government is planning a big bailout for airlines, hotels, cruise lines, the auto industry, and others.  If these folks get a bailout, it ought to be a loan, not a gift.  After all, some of these industries, notably the auto industry, got bailouts in 2008, but they were loans, not grants.  Those who got grants, like the “too big to fail” banks, were supposed to use it to pump money into the economy.  Instead, they tightened credit requirements, so few could qualify for loans.  The 2008 bailout was unevenly applied, and industries that didn’t have effective lobbyists did much worse than others. Many of the companies paid the government back.  We need to make sure they all pay it back this time.

My greatest concern is the medically vulnerable, people who have diabetes, lung disease, and heart disease, as well as those who are over 60.  This includes nearly half of all African American women (47.3 percent), along with 44.8 percent of African American men.  The incidence of heart disease for white women (33.8 percent) and men (37.4 percent) is significantly lower.

Coronavirus knows no race, gender, or age.  When the virus first hit, medical professionals, said that older people were more vulnerable than younger ones.  Now, the numbers are rising for young people, and even some children have been diagnosed with the virus.  It may be churlish to point out that African Americans are likely to be harder hit than other populations.  When white America gets a cold, Black America gets a fever.  Inequality is hard woven into our nation’s very fabric.  Thus, it is hard to imagine the hardest coronavirus relief will be race neutral.  African Americans are more likely than others to be unemployed, part of the gig economy, or otherwise at the economic periphery.

Furthermore, recession is inevitable.  Except for grocery stores, pharmacies, and banks, nothing is open.  People aren’t spending because there is no place for them to spend.  We don’t know how long this emergency will last – some say as long as 18 months.   But we do know that recession hits Black folk, poor folk, and marginalized folk harder than it hits others.  We won’t see the impact of this pandemic until after the fact.  But if the past is any indication, our nation will experience a harsh blow, and for African Americans, the impact will be even more jarring.

Dr. Julianne Malveaux is an economist, author, media contributor and educator. Her latest project MALVEAUX! On UDCTV is available on youtube.com. For booking, wholesale inquiries or for more info visit www.juliannemalveaux.com