Children’s books that can both promote literacy and history have to walk a very fine line.

Over the years, we’ve all come across books that make an attempt to do this, but it’s obvious that not every children’s book author has been able to confront the depths of history while making it entertaining for kids—without detracting from the subject’s seriousness.

It is often difficult to inspire and keep the minds of children––who are so often distracted––amused.

Two new books have been very successful in this attempt. “The Undefeated” (Houghton Mifflin Harcourt/Versify, 2019) is a beautiful picture book with illustrations drawn by Kadir Nelson and an ode-poem by Kwame Alexander. Nelson’s art work features famous Black figures—people like Gwendolyn Brooks, Jack Johnson, Maya Angelou, Jesse Owens, Romare Bearden, and W.E.B. DuBois—and it deftly pivots around Alexanders’ elegy to the effort and endurance it has taken for people of African descent to succeed in the United States:

“This is for the unforgettable/The swift and sweet ones/who hurdled history/and opened a world/of possible,” the poem states: “The righteous marching ones/who sang we shall not be moved/because Black lives matter.” The text of the poem weaves you through African American history, with well-known phrases that evoke people who have made a continuing impact on Black and United States culture.

Reading this book to my two elementary school-aged children, it was fascinating to see how those phrases (i.e., “Weary Blues” “by any means necessary,” “shine [their] light for the world to see,” “don’t stop til the break of dawn,” “we shall not be moved,” “Black lives matter” and more) that are so much a part of Black culture are new to them. They viewed the illustrations of how Africans were packed onto European slave ships, of marchers during the Civil Rights Movement, and of athletes and authors and painters with both pride and wonder. “I liked that it was all famous people that were in the book,” my daughter Sanaa commented. “I liked that they played games like sports even when the white people didn’t want them to, but they still did it because they were being brave.”

The other book we read was “A Place To Land: Martin Luther King Jr. and the Speech That Inspired a Nation” by Barry Wittenstein, illustrated by Jerry Pinkney (Holiday House/Neal Porter Books, 2019). Both of my children have heard stories and taken part in annual celebrations of Martin Luther King Jr., so they know a lot about who he is. “A Place To Land” caught their interest because it looks into how King wrote his famous “I Have a Dream” speech. The illustrations and text take you inside the Willard Hotel (now known as the Willard Intercontinental), where King famously sat in the hotel lobby with his closest advisors and made the final edits to his famous speech just hours before delivering it on the steps of the Lincoln Memorial. 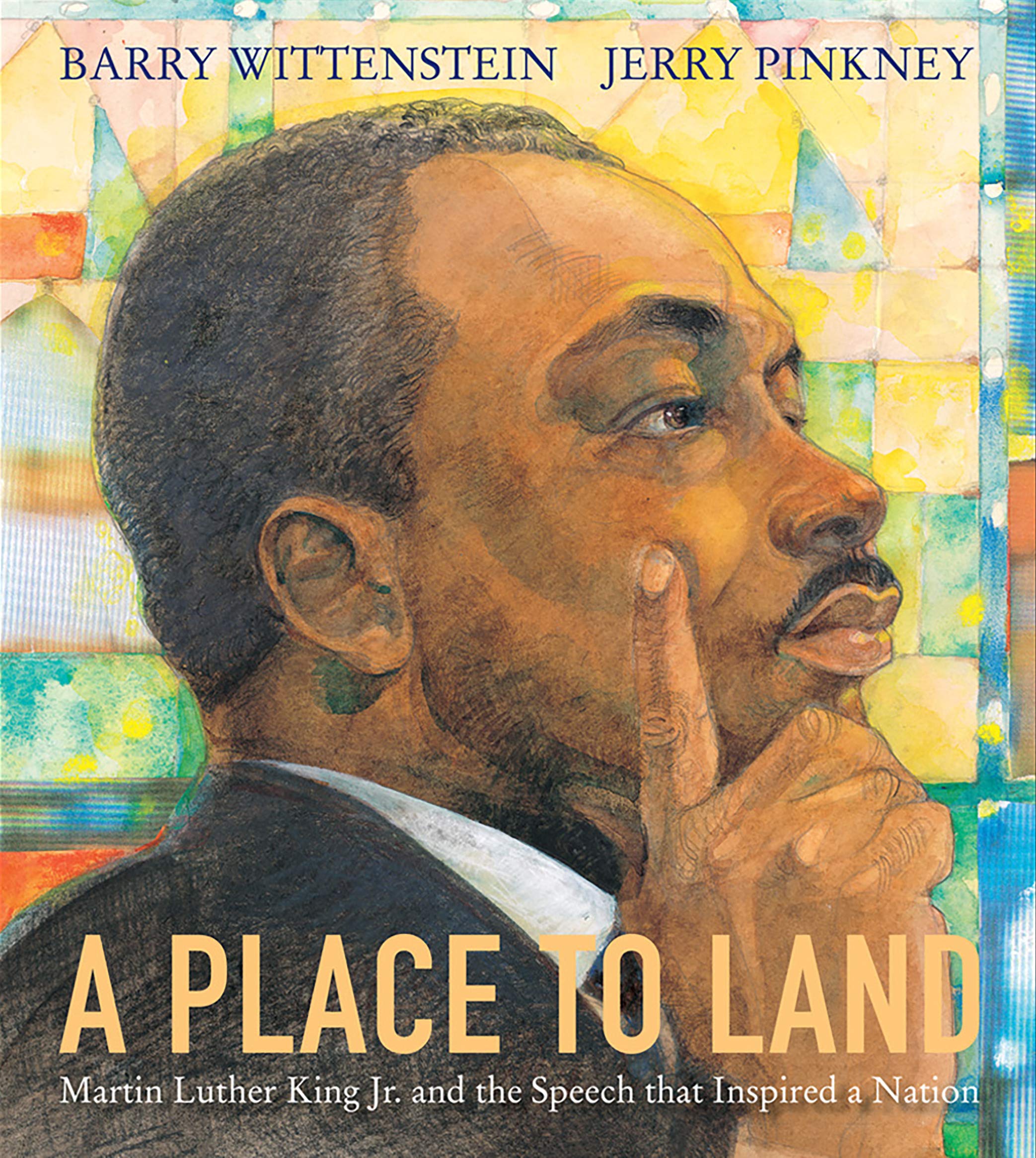 “A Place To Land” shows King asking for advice from his intellectual inner circle (Andrew Young, Rev. Walter Fauntroy, Cleveland Robinson, Wyatt Tee Walker, Clarence B. Jones, Lawrence Reddick, Bayard Rustin, Rev. Ralph Abernathy, and Rev. Bernard Lee) about what he should include in his speech the next day, and they give many opinions. But the book also shows King finding inspiration by remembering the lives of Black people who had too often lost their lives participating in the Civil Rights Movement—and it notes that King’s preaching, his metaphorical references to the “bad check” given to African Americans instead of their promise of American equality and his turn to “dreaming” of a better country, were not necessarily a planned part of the speech. “A Place To Land” points to the great gospel singer Mahalia Jackson as urging King to preach his speech rather than just deliver it, and that once he did so, the speech became memorable.

Seeing Martin Luther King Jr surrounded by other African American advisers and inspired by other figures of course meant that I had to explain to my children who each one of them was, and what organizations they led or worked with. It helped the children contextualize a broader view of the Black Civil Rights Movement and some of the other people who contributed to it.

When asked what he thought of the book, Mateo commented, “I liked how Martin Luther King Jr spoke up; he spoke up for himself and other people and he stopped a bigger war from coming to America.”

“I like that he stands up for other people and everybody was giving him ideas and stuff and he took that and … and he was, um, doing good stuff,” said Sanaa: “I like how he was saving other people from really bad things that were happening.”