Now that the coronavirus economic stimulus package is officially a go, there is finally a guarantee that most American adults will be receiving compensation from the government in the wake of a global pandemic. But as with most things bureaucratic, it’s just not that simple — even though it should be. The developments on Capitol Hill meant to provide relief to citizens (and, of course, corporations) whose lives have been upended by the pandemic have instead caused some confusion as anxiety builds surrounding the respiratory illness that has put the United States on the verge of becoming the world’s epicenter for COVID-19.

With all of that in mind, keep reading to find answers to some of the most pressing questions about the stimulus payments.

When will they arrive?

This is the most urgent question people have as a record 3.3 million American filed for unemployment benefits last week — the most in the nation’s 50-year history of tracking such claims. Unfortunately, the answer to that question varies, adding to the already mounting uncertainty over the coronavirus, which has killed more than 200 people and infected more than 65,000 people in the United States. Treasury Secretary Steven Mnuchin said he wants the checks to be sent out beginning April 6, which is about a week-and-a-half from now. But the New York Daily News estimated it could take as long as four months to arrive in the mail. The Washington Post reminded readers that the last time something like this happened — during the 2008 financial crisis — the entire process “took about eight weeks for the final people to receive their checks.”

How much will you get?

This seems to be the next-most urgent question after it was announced that payments would be guaranteed to about 80 percent of American adults. However, much like the first question, this answer varies, too. But, unlike the first question, this answer has a bit more certainty. That’s because it’s based on a simple formula that is calculated depending on the last time you filed taxes.

People who earn $75,000 or less are guaranteed to get a payment of $1,200. There will be an additional $500 payment for each child claimed. There is relief for folks earning more than that, but not much more as people raking in more than $99,000 annually are exempt from getting any payment at all. Those earning between $75,000 and $99,000 are expected to receive payments at a reduced rate that is $5 fewer for every $100 more than $75,000 earned per year.

Married couples are eligible to receive no more than $2,400 if they collectively make less than $150,000 annually and can get smaller payments with total salaries not exceeding $198,000. They, too, are set to get $500 for each child.

Lastly, single parents earning up to $112,500 are also eligible to receive $1,200 payments with other heads of household earning no more than $136,500 getting less. The $500 per child policy also applies here.

The Washington Post has a handy stimulus payment online calculator.

The United States government is about to send checks — or direct deposits — to most Americans to help people survive financially as much of the economy shuts down in an effort to slow the spread of the coronavirus.

Calculate how much you’ll get from the $1,200 (or more) coronavirus checks

Over 80 percent of American adults will receive a payment. 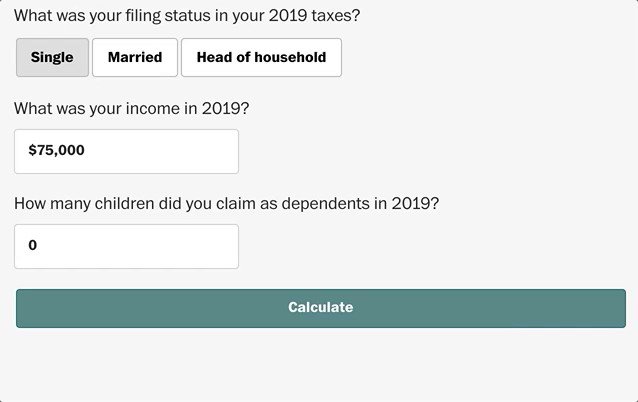 Is it only direct deposit payments or are they paper checks?

Both. But again, this comes with a hitch. If taxpayers have already filed for 2019 and indicated their payment preference — direct deposit or paper check — then that’s how the stimulus payments will be sent. However, if there was no preference indicated, then a paper check will be mailed to the physical address associated with the filing. For those who have not yet filed 2019’s taxes, the government could look at the 2018 taxes and remit a payment based on that preference. Otherwise, the government will defer to paper checks, something that could take months to receive.

Is it a one-time payment or will there be more?

Even though elected officials like Michigan Rep. Rashida Tlaib proposed a stimulus package that would put safeguards in place to ensure their citizens get regular payments for months, the United States decided for now that a one-time payment is appropriate. However, the Washington Post reported that “President Trump has said he is open to another round of the checks, but only if the economy remains anemic through the spring and an additional boost is warranted.” If that is approved, another payment could come over the summer.

Who is not getting a stimulus payment?

Aside from the wealthiest Americans, the underserved community of low-income residents who may not have filed taxes recently, or at all, are at risk of not getting paid even though they may need it the most, according to the Hill.