By Lane Wright – To say Arrealious Preston struggled in school would be an understatement. He came to KIPP Jacksonville as a first grader that had already been held back a grade. If he couldn’t grasp what was being taught, he would get frustrated and that frustration often turned into a meltdown that disrupted the entire class. Many days, the only way he could manage to sit through class was if the school called his grandmother in to sit next to him.

With a lot of hard work from the teachers and staff, and from Arrealious himself, he passed the first grade. But his challenges were far from over. Even with the help of grandma, he struggled through second grade and ultimately didn’t pass.

“We called mom in when we knew, early, that he was not going to pass,” said KIPP’s Executive Director, Dr. Jennifer Brown.

School administrators explained to his mother how he was still struggling with reading. They prepared her for how difficult it would be for him to watch his friends and peers advance a grade ahead of him—for the second time. They also helped her understand the kinds of resources they would enlist to support him: A mental health specialist to help him deal with his emotions, support from special education teachers who might recognize learning obstacles, and have ideas to overcome them. His principal, Kimberly Davidson, pleaded with his mother to let him stay at KIPP where they could give him the supports he would need.

Nobody at KIPP was willing to give up on Arrealious, but they also realized that if his mother chose to take him to a different school, they would be powerless to continue helping him.

His mother accepted, and he is currently working through his second second-grade year at KIPP Jacksonville.

“It is not all rosy,” says Brown. “He still has his challenges, but I have not heard his name come up one time this year, and we can see a change.”

While Arrealious’ behavior and learning issues are on the extreme end, in many ways, he’s a lot like most of students who attend the KIPP schools in Jacksonville. Like 98 percent of KIPP Jacksonville students, Arrealious is black. Like 100 percent of the students, he comes from a home that struggles financially. And like Arrealious, many of the students who come to these schools come with personal challenges, and in some cases, real trauma.

“I was boots-on-the-ground for a year—as a matter of fact, I landed in Kuwait the day the war started in March 2003,” says Brown. “I have PTSD. I have a diagnosis of acute Post Traumatic Stress Disorder. I recognize it in our kids. It’s a heightened sense of alertness. I still—and everybody in the office knows, loud noises, they bother me. Don’t sneak up on me. Like, that’s real,” Brown pauses. “I see that in our students. If you are in an environment that is unpredictable and then sometimes there is a layer of violence on top of that, our kids bring that with them. We don’t shy away from that.”

In fact, Brown and her staff, embrace children like that, like Arrealious. They plead for them to stay. In an often-politicized debate about school choice and accountability where charter schools are regularly (and sometimes falsely) vilified for cherry-picking students , KIPP Jacksonville goes out of its way to support and keep those kids who are most in need, those who traditionally have the biggest obstacles to learning: mental health issues, food insecurity, homelessness, etc. They make partnerships with groups like Children’s Home Society to embed mental health specialists full-time in their schools.

Still, Brown finds herself contending against the idea that public charter schools, like hers, are bad for traditional public education.

“I think most of the negativity is rooted, honestly, in misconceptions. All charters tend to get painted with very broad brush strokes,” Brown says. “But there’s a difference between for-profit charters, and not-for-profit charters. We are a not-for-profit. We have a specific mission. We’ve situated ourselves in northwest Jacksonville for a specific purpose. And that is to really serve this educationally underserved community.

“So we’re not swooping in with a savior complex. We are saying this community, historically, has not had access to high-quality teaching and learning. We want to provide that.”

For KIPP Jacksonville, providing that high-quality education means starting with a college-focused mindset—kindergarteners learn chants about when they’ll go to college on their first day, and pennants from almost every college and university in the country line the walls in the school. It also means a different approach to professional development for teachers and principals (they have mini self-evaluations at the end of each day), mandatory band class for all students in fourth through eighth grade, and a staffing structure that allows principals to spend 75 percent of their time in classrooms supporting teachers.

Still the school has struggled to score well on Florida’s school grading system.

“It’s easier to get results when you are working with a population of students who could basically teach themselves and who don’t have all of the challenges that say, come with all of our students,” Brown says.

It’s also important to note that those first-year grades don’t show how students have grown, since they don’t have a previous year to compare to that year’s student performance. In Florida, school grades account for students performing on grade level, and how much they grow, even if they’re not yet on grade level. Schools get credit for both (and more).

“Our first year we had kids in a tested grade we got an D and it hurt,” Brown says. “It was a blow. And when we were finished shedding tears and kicking ourselves and beating ourselves up, we started looking at the data. And we tried to figure out what was telling us before the state test that this was how kids were going to perform.”

With that focus, KIPP has improved one letter grade a year each year since, for each school. Over the summer, Florida’s department of education released the 2017 grades and revealed KIPP Elementary School is sitting at a C, and KIPP Middle earned a B.

They’re still striving for that A, but they’re also hoping parents and others who look at their schools will see behind the letter. School grades are an important window into a school’s performance, but they don’t tell a person everything, or even represent the experience that every child will receive.

Even an A school, for example, could have a significant achievement gap between white students and students of color, or between poor students and their middle-to-upper-class peers. Take Fletcher Middle School as evidence. The beach-side school on the eastern extremities of the city consistently scores A ratings in Florida’s accountability system. In the 2014-15 school year, black students only made up about eight percent of students (43 black students in total), but only about a third of those students were reading at grade level, compared to 72 percent of white students reading at grade level.

These are issues that Jennifer Brown understands, not only from the perspective of a charter school leader, but as a mother.

Two years ago, when she was exploring the opportunity to come to KIPP Jacksonville as the chief academic officer, she was also looking for a school to enroll her own daughter, a kindergartener. She had heard some things about KIPP Jacksonville that concerned her and wanted to find out if they were true. She made it clear in her job interview that if she didn’t feel comfortable enrolling her daughter at the school, she wouldn’t be taking the job their either.

After sitting in on some classes, and doing her due diligence, Brown accepted the job, and enrolled her daughter. Now, as the executive director, she takes the lead in helping all of her students at KIPP, including many like Arrealious, learn the knowledge and skills that will open doors to their future.

Lane Wright is an editor at Education Post who is focused on telling stories that help families understand how their schools are doing, how to make them better, and how policy plays a role. He’s a former journalist and former press secretary to Florida’s governor. 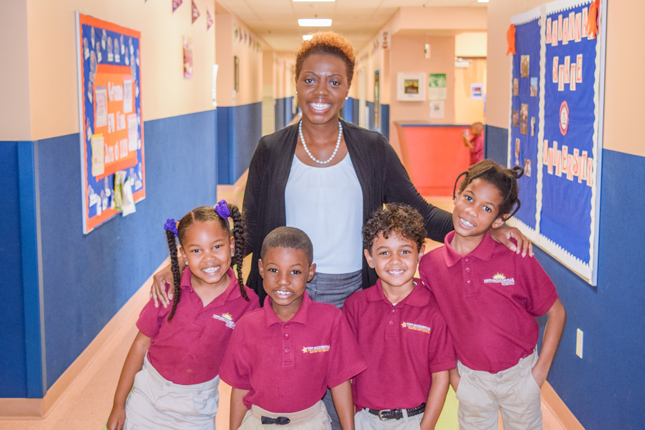