This past weekend Naval Air Station (NAS) Jacksonville hosted the 2017 Jacksonville Sea and Sky Air show to showcase ultimate flying acts. The skies were transformed into the backdrop for the exciting air acts and military demonstrations known around the world. The event was free and presented a dynamic sky show highlighted by the world-famous U.S. Navy Blue Angels along with other military and civilian flight teams. The air station was complete with live entertainment, a street festival featuring aircraft static displays, military vehicles, simulators, recruitment booths, a children’s area and more!

NAS is the birthplace of the Blue Angels, the United Sates Navy’s flight demonstration squadron with aviators form the Navy and Marines. The Blue Angels team was formed in 1946, making it the second oldest for flying aerobatic team in the world after the French Patrouille de France formed in 1931. Since 1946 the Blue Angels have flown for more than 260 million spectators and are inspired by a culture of excellence and service to country through flight demonstrations and community outreach.  Shown enjoying the festivities is Yvette and Donald Young with sons Donald W.S.Young Jr., and daughter Daesha A. Young . Louis Vanleer Photo 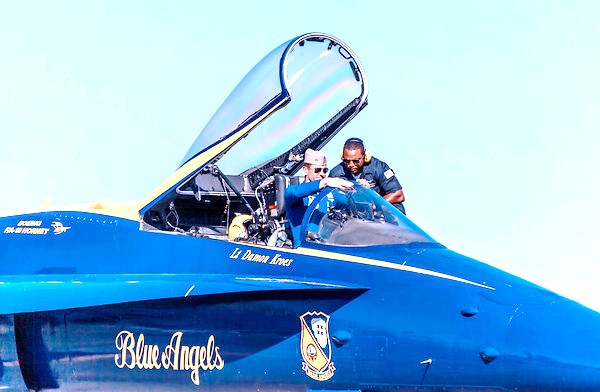