Breaking news
Homeownership Month kicked off the 20th anniversary of Wealth Watchers during its’ annual awards luncheon inside the Jacksonville River Club.  Hosted by President and CEO Carrie Davis, the luncheon honored partners and individuals who have built a legacy around making homeownership a reality for people of color.  The theme for this year’s luncheon was “Celebrating our Legacy of Generational Wealth,” where Ed Gaston, its founder and COO was awarded the first Legacy Award in recognition of his lifelong commitment to the cause.
Presently in its 20th year, Wealth Watchers Inc. is a HUD certified Housing Counseling and Community Development organization.  It’s formation was a result of a series of meetings of local financial services professionals who believed that education was the foundation for financial success to community and economic stability. 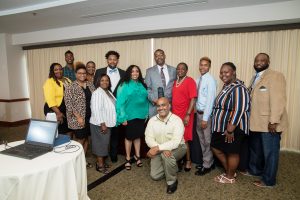