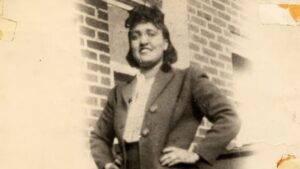 A bronze statue of Henrietta Lacks, the Black woman whose cancer cells were taken without consent or compensation and used to revolutionize biomedical research, will be erected in her hometown of Roanoke, Va.

WABE reports that officials will replace a statue of Robert E. Lee in a plaza that was also named in honor of the Confederate general. The Roanoke City Council voted 7-0 in August 2020 to remove the monument from Lee Plaza after it was toppled and vandalized during a social justice protest.

Supporters and the artists involved in crafting the statue of Lacks held a news conference Monday (Dec. 19) at the plaza, The New York Times reports. Local artist, Bryce Cobbs, displayed a preliminary drawing of Lacks wearing a blazer that the sculptor, Larry Bechtel, will use to design the life-size bronze.

“For far too long, America has used statues to commemorate men who divided our nation. It’s past time to celebrate a woman who brings us together!” Crump tweeted along with a video clip of his remarks.

Lacks, who moved in the 1940s with her husband to Baltimore, died from cervical cancer in 1951 at Johns Hopkins Hospital. Without her knowledge, a gynecologist at the hospital collected her cancerous cells.

He observed that, unlike cancer cells from other patients, Lacks’ cells continued to double every 24 hours. Researchers have used her cells, often referred to as HeLa cells, to develop treatments for leukemia, Parkinson’s disease, COVID-19 vaccines and other illnesses.

Lacks’ estate filed a lawsuit last year against pharmaceutical company Thermo Fisher Scientific for using her cells without Lacks or her family’s consent.

“This beautiful woman was born Aug. 1, 1920, right here in Roanoke, Virginia, and we want to honor her, and to celebrate her,” Trish White-Boyd, Roanoke’s vice-mayor, said at the press conference, according to WABE.

White-Boyd and the Harrison Museum of African American Culture spearheaded a fundraising campaign for a public history project to replace Lee’s monument. The Roanoke Hidden Histories raised more than $183,000 to pay for the statue and a virtual reality documentary about the town’s history.

At the press conference, the sculptor said he plans to form a two-foot model of Lacks before creating a six-foot model.

“Hopefully, if everything goes right, we will have an unveiling of this splendid sculpture next October,” he said, according to The Times.