SUMTER, S.C. — Bernice Harris was with her granddaughter Saturday afternoon when they heard a surprising rumor: Senator Bernie Sanders of Vermont was going to visit their city later that day, holding a rally at an African Methodist Episcopal Church. 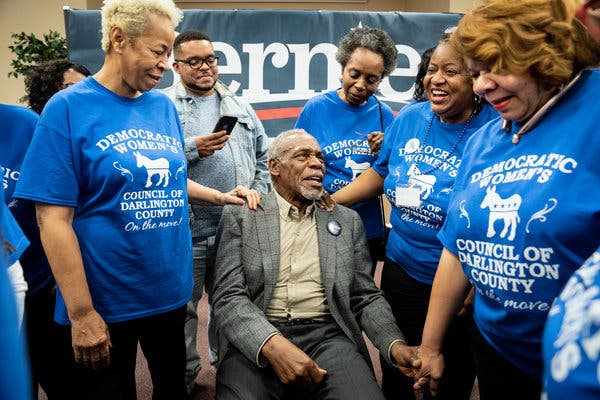 But when Ms. Harris arrived at the church, Mt. Pisgah A.M.E., it became clear that there had been a mistake. Mr. Sanders was not in Sumter, but in Iowa. The event was a question-and-answer session, attended by only about 50 people. And playing the role of septuagenarian keynote was Danny Glover, the activist and actor perhaps best known, at least by the Sumter crowd, for the “Lethal Weapon” films.

“I thought Bernie Sanders would be here, and I wanted to hear him one-on-one,” said a confused Ms. Harris, a 68-year-old caregiver.

“But you know what,” she said, looking on as Mr. Glover conducted a selfie line in front of a large campaign banner, “he represented Bernie well.”
Our reporters will send you live updates and analysis during the Democratic debates.

As voting in the 2020 Democratic presidential primary inches closer by the day, candidates are increasingly sharing top billing with a wide array of stars, clearly aware that celebrities can often connect with audiences that the candidates themselves can’t reach..

In the last week, Judy Sheindlin, the retired family court judge better known as Judge Judy, opened for former Mayor Michael R. Bloomberg of New York, joining him over the weekend as he stumped in Texas.

Martin Sheen, the actor who played a fictional president on the television drama “The West Wing,” announced at a recent climate rally that he was supporting Senator Elizabeth Warren of Massachusetts. On Monday, the singer and actress Mandy Moore campaigned for former South Bend Mayor Pete Buttigieg in the vitally important caucus state of Iowa. And on Tuesday, the comedian and actor Dave Chappelle endorsed the entrepreneur Andrew Yang and announced he would perform two shows in South Carolina later this month to benefit Mr. Yang’s campaign.

Over the weekend, Mr. Glover toured rural communities in South Carolina on behalf of Mr. Sanders, pitching black voters in Hartsville, Dillon and Mullins on his vision of a political revolution.

At times, he related to the audience, often made up of older black voters, in ways Mr. Sanders would find hard to replicate, referencing his upbringing in the A.M.E. church or his family’s roots picking cotton in the South. With Mr. Glover speaking, Mr. Sanders’s slogan of “not me, us” meant something different. It was targeted directly at black people.

At the stop in Sumter, Mr. Glover told a crowd that Mr. Sanders was the 2020 embodiment of Dr. Martin Luther King Jr.’s political ideology.

“If Dr. King was with us today, at 90 years old last year, he would be voting for Bernie Sanders,” Mr. Glover said.

In a later interview, Mr. Glover questioned whether celebrities have extraordinary persuasive power.

“I honestly don’t know, but I don’t abdicate my responsibility as a citizen because I make movies and people like to go to my movies,” he said. “And there are other people supporting him I know — Mark Ruffalo, Susan Sarandon — we can’t wait to get together and campaign for Bernie.”

The 2020 candidates are all seeking political and celebrity endorsements, and proudly announcing them when they land, but the value of big-name fans has not yet seemed to translate into broader support.

Senator Kamala Harris of California, who had more endorsements from the Congressional Black Caucus than anyone in the Democratic field, was also a leading candidate on the Hollywood front. Mindy Kaling, the comedian and actress, put out a cooking video with Ms. Harris in November, just weeks before she dropped out of the race. Former Representative Beto O’Rourke of Texas had stars like Beyoncé and Frank Ocean in his corner during his 2018 challenge to Senator Ted Cruz. His presidential campaign lasted less than eight months.

In South Carolina, voters attended Mr. Glover’s stops for a variety of reasons. While there were some gawking fans, eager to see an actor whose career stretched back decades, the focus was undoubtedly political. Even in his introduction, Mr. Glover’s political activism got more attention than his film work.

She decided against a photo with Mr. Glover — choosing instead to shake his hand — because the pictures were being taken in front of a “BERNIE 2020” banner.

Ms. Lathan said she understood the sentiment, and this election was too important to get caught up anything but the issues.

“We’re not about to fall for the okie-doke,” she said. “This is not about a popularity contest.”

An endorsement, more than anything, can send a signal. If high-impact ones from elected officials come with the added political benefit of volunteers or increased fund-raising, the best celebrity endorsements pull cultural weight. Campaigns package them for larger resonance, hoping for a viral online moment or an opportunity to drive more grass-roots donations.

When Ms. Warren earned the endorsement of the soccer star Megan Rapinoe, it came as the candidate was emerging as the only woman in the race’s top tier. In a phone call between the two, a video of which has nearly 2 million views on Ms. Rapinoe’s Twitter account, they discuss gender equity and allude to the ongoing fight for increased wages for the national women’s soccer team.

Critics say that because celebrities in music and film are overwhelmingly liberal, their endorsements create a bubble effect, in which the chattering cultural class is out of step with the electorate at large.

President Trump, who spent years as a pop culture icon himself, was mostly shunned by the Hollywood class during his 2016 run. He won anyway.

In the Democratic primary, Mr. Biden has opted for political and celebrity surrogates whose names largely reflect an earlier era, including John Kerry, the former Democratic nominee, and the Olympic figure skater Michelle Kwan. He remains the primary’s front-runner.

But Mr. Sanders, in particular, continues to hold a unique cultural footprint, and the celebrity endorsements to match it. He is helped by sky-high name recognition, off the back of his insurgent presidential run in 2016. His support among young voters and progressives also plays out in the Hollywood sphere — he tweeted photos with the singer Ariana Grande, 26, and released an endorsement video with Emily Ratajkowski, 28, an actress and model.

Cardi B, 27, the Bronx-born rapper, interviewed Mr. Sanders in a video released this summer.

“Don’t you ever feel, like, scared that these people that run drug companies and schools, you know it’s all a business, and it’s like, are you scared that you will get so many powerful people upset?” she asked.

In South Carolina, Mary Williams said she had heard Mr. Sanders was popular with young voters. But she added that celebrities, and even black celebrities, would not be able to convince her to blindly back a particular candidate.

“Of course it’s nice to see and meet him,” Ms. Williams, a 75-year-old retired educator from Sumter, said of Mr. Glover. “But hey — I’m a star myself.”