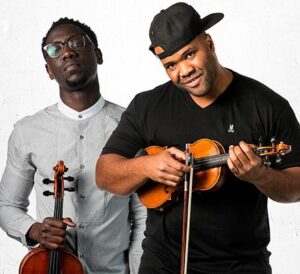 The Grammy-nominated, classically trained strings virtuoso’sknown as “Black Violin” will perform Tuesday at the Florida Theater Jacksonville kicking off their national “Give Thanks” holiday tour.  Black Violin is hailed by many as exceptional masters of the strings – the violin and viola but with a sound that is uniquely their own.

Kevin Sylvester who goes by the stage name of Kev Marcus met his partner Wil B, née Wilner Baptiste  in their 10th grade orchestra class at Dillard High School in Fort Lauderdale.  Both became classically trained; Kev on the violin and Wil on the viola, joining forces to become Black Violin.  For the past 17 years, Black Violin has merged modern beats with classical string arrangements earning a Grammy nomination along the way for Best Contemporary Instrumental Album, Take the Stairs.

The Jacksonville Free Press had the opportunity to speak with one-half of the dynamic duo, Kev Marcus. Watch any virtual or live performance of the duo and you’ll recognize Kev as the one who always wears a Black Violin hat that he personally signs before the encore and gifts to a lucky concert attendee.

JFP:  During the pandemic, you seemed to have no problem connecting as virtual performers.  Can you describe what that process has been like for you – performing in the virtual space?

Black Violin – Kev:  I am personally not a hug fan particularly of the virtual show.  After you finish the song, and everyone is watching you – you don’t get that reaction and that’s the thing as a performer that I’m hooked too – is doing something and being able to cultivate a reaction.  So, it feels one-sided on the virtual stage.   So, I’m more than excited to be back on stage and playing in Jacksonville.  I’ve got so much family there in Orange Park, it’s almost like a second home.  Virtual is cool, it’s something we got by with.  The great thing we did do – we recorded a virtual concert for kids that has been used as a zoom field trip so to speak throughout Covid and that was awesome!  But now we’re back on stage and we’re excited about being live and touring again.

JFP:  ​You encourage your audiences to get out their seats, dance, and have a  good time.  Are they surprised by that at a strings concert?

Black Violin – Kev:  Sometimes…if you’ve never seen us before, we always say that because people get the wrong idea when they see the violin.  They think it’s going to be a violin concert in the traditional sense.  But there’s nothing traditional about the experience that you’re going to have at our concert.  We are playing traditional instruments but doing it in a different way, so we are very encouraging.  We want you to get out of your seats, hoot, and holler and yell if you like what you hear.  The response of the audience is important to  us because it’s a part of the experience, that it feels unlike anything else.

JFP:  I love the different genres of music you play during your performances…

Black Violin – Kev:  We’re just doing what feels good to us.  We grew up listening to all types of music – calypso, jazz, we lived in the 90’s so there is hip-hop…baggy pants…all these things together are what we present on our stage.

JFP:  What can the Jacksonville audience expect on Tuesday?

Black Violin – Kev:  A high-energy, really off the wall performance.  This tour is called, “Give Thanks,” our holiday tour named after our holiday album.  We released it last year and of course we could not tour, so this is the first time we are playing it live.  It’s really a homecoming concert.  It’s a holiday album that you can listen to in July.  It’s going to be some Joy to the World, Donny Hathaway’s, This Christmas, it’s going to be all kinds of reimagined Christmas songs.  It’s a vibe and fans can also take a listen to our album – Give Thanks and get a vibe of what we’re talking about.

JFP:  You have said that you can’t believe where your instruments have taken you – from performing and teaching over 200,000 kids to performing for President Obama.  Have these experiences motivated you to pay it forward?

Black Violin – Kev:  We’ve been able to experience and do some things that have just blown our minds.  We want to be that for some kids too.  That’s why we established a Foundation – the Black Violin Foundation Inc., a non-profit that gives grants for scholarships, lessons, summer camps, and instruments.  One of our grants is named the James Miles Innovative grant, named for our orchestra teacher who pushed us, inspired us and sometimes was also a father figure to us, who helped filled in the gaps when we needed him.  We want to do the same for others.  We look at it as our responsibility to pay it forward.

JFP: After 20 years together, from the 10th grade until now – what single word describes your partner Wil?

JFP:  And if Wil were here, what single word would he select to describe you?

JFP:  Wil calls his viola “Tiffany.”  Have you named your violin?

Black Violin – Kev:  I play multiple violins and Wil has been playing Tiffany for 20 years.  I have so many of them and if I named one, I would have to name them all.  I have a wife and three daughters, so I have enough girls in my life, but Wil does love Tiffany!

JFP:  Wil sings during your performances.  Do you sing?

Black Violin – Kev:  I can hold a note, but I leave all the singing to Wil.

Black Violin – Kev:  Just getting back on the road and involved in communities and doing more work with our Foundation.

JFP:  What would you say to kids who have an interest in music?

Black Violin – Kev:  Practice…be disciplined and find yourself in the music but most important, be true to yourself.