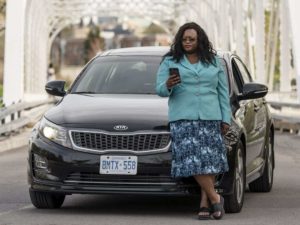 People of color have been dealing with racist cabbies for decades, and according to a new study, that discrimination is alive and well in the world of ride-hailing apps. Not only are black people more likely to wait longer or have their ride cancelled, women in general also are getting taken for a ride—to either boost the fare or flirt.

The National Bureau of Economic Research, a respected non-profit and non-partisan research organization, has released the findings of a two-year study that tracked discrimination of riders using Uber, Lyft, and Flywheel in Seattle and Boston. The study was done by researchers at MIT, Stanford and the University of Washington.

The study involved nearly 1,500 rides across the two cities, with work beginning in Seattle late last year to this March. Undergrads from the University of Washington were given identical phones with the three ride-sharing apps pre-loaded, instructed to take a handful of prescribed routes, and then noting when the ride was requested, when it was accepted by the driver, when they were picked up, and finally when they got to their destination.

In the Seattle experiment, trip requests from black riders took between 16 to 28 percent longer to be accepted by both UberX and Lyft, and breaking UberX out showed a wait time of 29 to 35 percent longer than their white counterparts.

Those figures are based on UberX usage, primarily because of the different ways a new ride is displayed to the driver through the Uber or Lyft app.

For Uber, drivers don’t see the name of the person they’re picking up until they accept the fare, at which point they can cancel. But for Lyft, which displays the rider’s name and picture (if they included it) before they accept the fare, means trying to quantize discriminatory practices through Lyft is largely impossible—a model Uber could conceivably adopt.

For the Boston experiment, the team turned to a previous study by NBER that sent identical resumes to potential employers, with one set having what’s described as an “African America-sounding” first name and another with a “white-sounding” first name. The results showed that callbacks for the former happened about one-third less.

The researchers for the ride-sharing study took a similar tack, using names from the 2003 survey to set up two different Uber and Lyft accounts for each rider—one with an “African American-sounding” name and another with a “white-sounding” name. The team also made another change from its Seattle methodology; rather than picking an equal number of black and white and male and female riders, they recruited students with a range of ethnicities “whose appearance allowed them to plausibly travel as a passenger of either race,” the study states.

For the men involved in the study, those that used the profile and appeared to be black riders had a cancellation rate more than twice as high as a profile of a rider who appeared to be white
(11.2 percent vs. 4.5 percent).

Worse, in low population density areas where getting a ride can be challenging, users with African American-sounding names were cancelled at a rate of 15.7 percent—triple that of white males.

While this latest study re-confirms what black people have experienced for decades with taxi cabs, it’s the latest in a long string of public battles that Uber, in particular, has had to fight. In addition to the legal battles surrounding the discrimination of the disabled fought by both ride-sharing companies, Uber has dealt with a claimed kidnapping, an abduction, a driver hitting a passenger with a hammer, and a host of other controversies before getting into “Ubering while black” situation.

And then there’s the creep factor.

The results of the study showed that female riders are driven on routes that take approximately five percent longer, with anecdotal experiences backing that up—and then some.

According to the study, not only were women more prone to being overcharged by drivers starting the trip early or ending it after they’d already been dropped off, female riders reported instances of “chatty” drivers taking them on elongated routes.

The routes were pre-planned to not exceed a mile or two to keep the study’s costs in check, which highlighted the extent of drivers taking female passengers on longer rides than necessary.