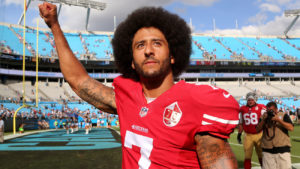 Colin Kaepernick has taken his protests of police brutality to the people.

During his team’s bye week, the San Fransisco 49ers quarterback hosted a free youth camp in Oakland on Saturday called Know Your Rights. The program aims to teach kids about various important issues, including higher education, self-empowerment and interacting with law enforcement. Hundreds of black and Latino children from the Bay Area attended, according to the New York Daily News.

“We’re here today to fight back and give you all lessons to combat the oppressive issues that our people face on a daily basis. We’re here to give you tools to help you succeed,” he told the attendees, according to the Daily News. “We’re going to give you knowledge on policing history, what the systems of policing in America were based on, and we’re also going to teach you skills to make sure you always make it home safely.”

The camp staff, which consists of Kaepernick and a small group of volunteers, also highlighted 10 basic rights they believe each child should know they have, including the right to be free, healthy, safe and educated. The day was constructed around these rights, which were inspired by the 10-point plan created by the Black Panther Party, who celebrated their 50th anniversary in October. Former party member Ericka Huggins also attended to share her knowledge.

“It’s exciting for me because I see a lot of hope, I see a lot of what is to come,” Kaepernick told The Undefeated. “And if you look at a lot of movements in past history, it started at a youth level and has built. And that’s really where change is created, is when youth come up and they’re built in that culture of, ‘I know what this means, I know why this is happening and I also know how to help create change now.’”

He shared a story with the kids about how he recently traced his roots back to Ghana and Nigeria. The athlete told the kids that they, too, would be able to trace their ancestry free of charge.

The quarterback told The Daily News that he has plans to expand Know Your Rights Camp to cities outside of the Bay Area.

“What we’ve done here today in Oakland, we want to do all over the country, in cities all over this country, by bringing together local leaders, local activists and local youth, and not only giving them the skills and lessons they need, but we want to show them how much we love and value them.”