I grew up in the Southern region of the United States. Contrary to popular perception, race was not a pervasive part of my Southern childhood. In fact, I never really thought much about it until I left for college. I attended Louisiana State University, a predominantly white institution in Baton Rouge, where I was often the only black face in the classroom. It never bothered me, in fact, I liked it. I’ve always hated being one of many or following the crowd, and being the sole representative for black people gave me a unique voice and perspective no one could deny, and that they certainly found interesting. But the “sole black face” phenomenon became exponentially obvious when I began traveling overseas to places where people had never even seen a black person in real life.

Besides the fact that I’m black with natural hair (often worn in braids, twists, or a big “Foxy Brown” ‘fro), I’m also 6’2″, taller than the average woman in almost any country, including my own. This combination of physical features puts me squarely in the sights of most locals, particularly in Asia. I’ve had people point and stare, then elbow their family or friends sharply so they could point and stare, too. I’ve had people follow me into stores, dogging my every step to get a closer look, all but tripping and falling over themselves when I mischievously and quickly turned around as if to physically say “Gotcha!” I’ve had people come up and talk to me, openly curious and anxious to practice their limited English with a native American, but shocked and pleased when I was at least able to say “Hello” or “Thank You” or “Good-Bye” to them in their own language.

I’ve had people directly ask to take my photo, and caught many a person indirectly taking it when they thought I wasn’t looking or paying attention. Once engaged with me, I’ve had people extend an arm and compare their skin color to my skin color, or extend a leg to compare my longer, thicker, “meatier” legs to their often shorter, skinnier ones. I’ve had people point at my hair and reach out to touch a wisp of it, wildly curious about its design and texture. I’ve had young teen-age girls titter and giggle with nervous excitement as they asked me questions about my hair, and my background, and my life, then we all giggled together as they massacred my American name, and I annihilated their Chinese ones. I’ve had people hug me, kiss me, try to interest me in a clandestine affair, and even try to set me up on a date with their son. And once I’ve engaged with one person, the flood gates literally open as others see I’m receptive to a photo opportunity or in-depth conversation.

And through all the engagements and interactions around the world, rarely have I ever been bothered or annoyed by any of it. Logically speaking, if the locals have never seen a black person in real life before, then obviously they will be quite curious…and looking for ways to address their curiosities — a perfect scenario for a friendly and sociable person such as myself, who can strike up a conversation with anyone and who makes friends everywhere. The part I love most about these connections? Helping the locals see that while we may have different skin colors, hair textures, and other physical differences, deep down inside (where it counts), we’re more alike than we are different.

Because you see, to me, racism, prejudices, and stereotypes have a strong root in perception, in beliefs that are largely perpetuated by the media, but typically have no basis in fact. And these beliefs will maintain their stronghold…until presented with physical evidence to the contrary. For example, a local may believe the stereotype that all black people are violent or just interested in what they can get or take…until faced with a tall, friendly, smiling black woman with wild hair who is interested in nothing more than making a connection, and then that stereotype must be reassessed in light of this new knowledge.

Now I’m not so egotistical or naïve as to think a sole interaction with me is enough to eradicate years of prejudicial thoughts. But if by allowing a photo, the touch of my hair, or engaging in a simple conversation that shows we’re both trying to make a connection despite the cultural and language barriers, I can plant the seed for further assessment of one’s beliefs, then that’s good enough for me.

Some black people don’t care to indulge the behaviors I’ve noted in this post. To put it bluntly, they feel it puts them in a situation akin to a zoo or public arena, on display solely for the viewing pleasure and entertainment of the locals. They wouldn’t dare allow a touch of their person or hair, and are often leery of even allowing photos. How unfortunate. They travel all that way and spend all that money to see another country and [presumably] learn another culture, and then deliberately avoid one of the easiest opportunities to do just that…by indulging the harmless curiosities of the locals…a curiosity that, once explored, may be the beginning of a new way of thinking for that person.

Other black people have attributed their disdain for these type interactions to the aggressiveness of the locals. I, myself, have only experienced one scenario where an elderly, grandmother-type hit me on the arm and pointed to the camera. Part of me could have been peeved, to be sure, and I could have declined taking the photo. Instead, I attributed her abrasive manner to the language/cultural gap and her senior age, and I posed with her anyway. After all, despite her abrupt demeanor, it was obvious she still wanted my photo. Did she hurt me with her feeble hit? Of course not. And besides, my own two grandmothers (90 and 91-years old) have their share of ornery days that put my patience to the test…and they’re blood relatives! The point is, some people make much ado about nothing.

And so I will continue to partake in these harmless interactions for as long as there is interest on the part of the locals. For these social connections not only provide them with a chance to explore their interests up-close and personal (perhaps providing a basis for reassessing any negative perceptions they held about Black people), but they provide me with a treasure of travel memories. From the little 5-year old Chinese girl in the airport who shared her banana with me, and who I pulled into my lap and hugged tightly in gratitude as her father took a photo of us together to the tour guide urging me to tell my “fans” good-bye or it would be good-bye for ME (after I had just spent 45-minutes holding court with the locals outside Tiananmen Square), I smile warmly when remembering these encounters…my attempts to bridge the cultural and racial divide – one personal interaction at a time.

“If you reject the food, ignore the customs, fear the religion, and avoid the people, you might better stay at home” – James A. Michener

This story was curated by Sonjia Mackey. (blackwind tours photo) 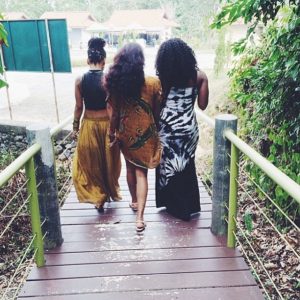