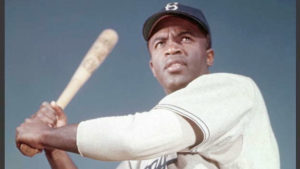 When Robinson nervously stood at second base in his first game in the majors he later said that he was “uneasy” and far less hopeful that his feat would change American attitudes toward Blacks. Twenty-five years after that historic day in 1947 Robinson’s unease became bitter doubts. In his autobiography, I Never had it Made he unapologetically declared: “I cannot stand and sing the anthem. I cannot salute the flag. I know that I am a Black man in a white world. I never had it made.” This is the other story Robinson repeatedly told in his autobiography, letters, and columns in the New York Post and the Amsterdam News.

In 1949 Black singer/activist Paul Robeson made an ill-timed, and much distorted statement that Blacks were sympathetic to the Soviet Union. Robinson was pressured to testify before the witch-hunting House Un- American Activities Committee to refute Robeson. Robinson did not want to be used as a Black pawn to attack Robeson.
In his testimony he opposed Communism, criticized the Committee for its “partisan politics” and fiercely attacked racial discrimination: “We’re not going to stop fighting race discrimination in this country until we’ve got it licked.” Years later he did not regret his testimony but he told why he “would reject such an invitation” today: “In those days I had much more faith in the ultimate justice of the American white man than I have today.”

For more than a decade Robinson gave speeches, helped raise funds, and made generous contributions to the NAACP and the SCLC. But in 1967, he resigned from the NAACP’s board of directors accusing it of being “insensitive to the trends of our times, unresponsive to the needs and aims of the Black masses—especially the young—and more and more they seem to reflect a refined, sophisticated, ‘Yassuh-Mr. Charlie’ point of view.” His criticism foreshadowed the identical charges made by dissidents that would nearly wreck the NAACP almost two decades later.

Many Blacks called Robinson an “Uncle Tom and “sell-out” for supporting the Republican presidential bid of Richard Nixon over Democratic candidate John F. Kennedy in 1960. Robinson did not receive any money or political favors for supporting Nixon. His sole litmus test was how strongly a candidate supported civil rights: “I was not beholden to any political party. I was Black first.”

But the Nixon of 1960 wasn’t the Nixon of 1968 who inflamed law-and- order sentiment, and pandered to racist white Southerners. As Eisenhower’s vice president, Nixon vigorously fought for the civil rights bills of 1957 and 1960 and for stronger action against racially- motivated violence. The Kennedy of 1960 wasn’t the Kennedy of 1963 who took forceful civil rights action. As a senator, he voted to water down a section of the Civil Rights bills of 1957, and actively courted racist Southern Democrats. Robinson promised that if his candidate betrayed him on civil rights, “I’ll be right back to give him hell.” He did. He denounced the political mean-spiritedness of Nixon and the Republicans. “Every chance I got I said plainly what I thought of the right-wing Republicans and the harm they were doing.”
Like many then, Robinson at first regarded Malcolm X as an anti-Semitic, race-bailing demagogue and criticized his approach to racial problems. But in time he came to respect and admire Malcolm: “Many of the statements he made about the problems faced by our people and the immorality of the white power structure were the naked truth.”

He staked his career and reputation on making black economic empowerment a reality. He believed; “There were two keys to the advancement of Blacks in America—the ballot and the buck. If we organized our political and economic strength, we would have a much easier fight on our hands.”

Robinson got the break of the century when he was chosen to crack the color bar in baseball. He was courted by politicians, showered with persona] honors, and attained a measure of financial success. Yet at the end of his life, he realized that many Blacks had continued to lose ground: “I can’t believe that I have it made while so many of my Black brothers and sisters are hungry, inadequately housed, insufficiently clothed, denied their dignity, live in slums or barely exist on welfare.” Robinson until the end insisted, he never had it made. He’d likely say the same today. That’s the Robinson baseball won’t remember, but we should.

Earl Ofari Hutchinson is an author and political analyst. He is the author of the forthcoming What’s Right and Wrong with the Electoral College (Amazon Kindle)

He is the host of the weekly Hutchinson Report on KPFK 90.7 FM Los Angeles and the Pacifica Network. His weekly political commentaries can be found at thehutchinsonreport.net