Breaking news
TED, the acronym for technology, entertainment and design, has forums across the country to aspire and educate audiences. Last weekend in Jacksonville, eleven speakers and three musical performers shared the stage at the TEDxJacksonville Conference at The Florida Theatre.  Organizers goals were to open minds with inspired ideas.  The organizers are volunteers who are licensed by TED to independently organize TED-like events.
Each year, in the spirit of TED’s mission, “Ideas Worth Spreading,” events are hosted at several TED Talk viewing salons centered around varying themes relevant to our community.  TED brings the global conference to a local venue by simulcast or livestream and occasional production of a live, day-long, 700-person conference where a diverse roster of speakers are recorded giving the Talk of their lives for submission to TED.com. “Why do we do this? Because we believe our city’s greatest assets are the ideas and dreams of its citizenry, and we want to be the platform that gives those ideas and dreams a voice,” said organizer David Johnson. The event featured experiential activities, including the Urban Monk leading Tai Chi for attendees from the stage and during the breaks. The event included lunch and an after-party at the Jessie Ball duPont Center with other experiential activities. 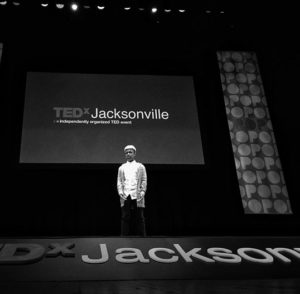 Cultural ambassador, poet and hip-hop artist Mal Jones brought the crowd to their feet while extolling the power of the arts. “Support the arts because that’s what kept this lyricist alive,” Jones said on stage. Jones is the creator of The Lyricist Live and often performers at First Wednesday Art Walk in Downtown.
Brandon Griggs, a student from the EVAC movement, spoke about “The Illiteracy to Prison Pipeline” and the importance of delivering a level playing field in our schools and in the homes of students. He recounted having an assignment due in which he had to create a PowerPoint project, but didn’t have a computer at home. Thomas Hargrove of the Murder Accountability Project uses data to examine communities with a preponderance of murder and unsolved homicides. Phillip Singleton, an advocate known as the “Hip-Hop Lobbyist,” talked about creating change their policy at the state and local level.  Dr. Tammy Hodo spoke on “deconstructing race” and how race is an institutional construct, not a biological one. “When you grow up biracial, particularly when your mother is the white parent, you have insight into white privilege,” Hodo said on stage. “Once I left her home, I was assumed as black, which takes away half of my identity.”
At the conference, TEDxJacksonville announced the launch of the first TEDxYouth@Jacksonville conference scheduled for Tuesday, March 3, 2020, featuring only youth speakers and performers. Shown is TEDxJacksonville speaker Mal Jones on stage.