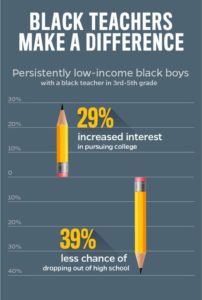 If a low-income black student has just one black teacher in elementary school, that student is significantly more likely to graduate high school and consider attending college, a new John Hopkins University study has found.

These results come from a longitudinal study that tracked 100,000 black students who entered 3rd grade in North Carolina public schools between 2001 and 2005 all the way up through 12th grade.

Researchers later replicated their findings in Tennessee, by looking at black students who entered kindergarten in the late 1980s through a class-size-reduction program. Those students who had at least one black teacher in kindergarten through 3rd grades were 15 percent less likely to drop out, and 10 percent more likely to take a college entrance exam.

The paper was published by the Institute of Labor Economics in March. Co-author Nicholas Papageorge, an assistant economics professor at JHU’s Krieger School of Arts and Sciences, told Education Week Teacher that while he wasn’t sure why there was a link between teachers’ race and positive outcomes for black students, he had some ideas.

First, it could be that some of the black teachers in the study were just better teachers. Another option is that this is an example of the role-model effect.