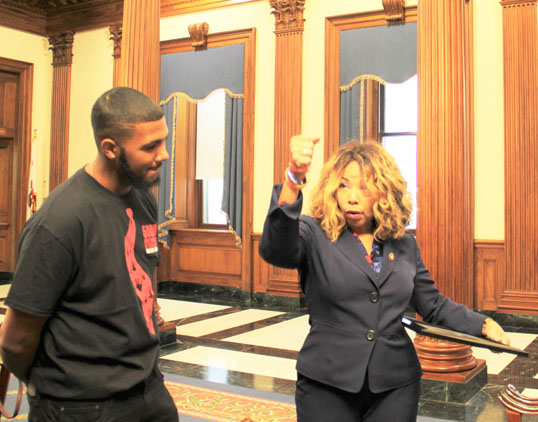 Students from Terry Parker High School’s 5000 Role Models of Excellence Project left Wednesday, May 15, 2019 for Washington, DC.  Invited by the 5000 Role Models’ Founder, Congresswoman Frederica S. Wilson, and joined by fellow 5000 Role Models of Excellence students from the Miami-Dade Chapter, the trip was certainly one to remember.
Upon arrival, students were whisked to the Capitol and greeted by the Congresswoman herself.  Students were treated as VIPS with side-door entrances and special accommodations in the Congressional Gallery.  After observing a house committee vote, students joined Congresswoman Wilson and fellow congressional supporters outside for a press conference introducing the Commission on the Social Status of Black Men and Boys, a bill the Congresswoman is seeking to establish.
The students stay included touring the National African American Museum, the Lincoln, Jefferson, and Martin Luther King Memorials, and taking pictures in front of the White House.  These experiences reminded this group of the big world outside of their environment.  Each returned to Jacksonville with a renewed commitment to excellence and a better understanding of how hard their ancestors fought for the many privileges they have each day.
The young men also paid a visit to Congresswoman Lucy McBath and presented her with a class ring symbolic of her slain son Jordan Davis.
With tears in her eyes, she encouraged the students to never give up, to always reach back and to use their platform to help someone else.
Students from Terry Parker returned to the district building Friday night, and almost immediately were informed of a shooting at their school’s spring football game.  Such an amazing trip was book ended by the sobering reality that there’s much more work to be done, and the need to provide more role models, resources and beyond-the-neighborhood exposure through the 5000 Role Models is needed now more than ever.
For more information on the 5000 Role Models of Excellence – Duval Chapter and how to get involved, visit www.duvalschools.org/5000RoleModels or call 904.390.2960.