By C.B. McIntosh – A group of dedicated Stanton graduates, one of Jacksonville’s most historic institutions, recently gathers to commemorate its founding principal and African American icon, James Weldon Johnson.

Representing several generations, the group of 26 former students witnesses the dedication of the marble memorial to Johnson outside of graduates of Old Stanton High in Historic LaVilla on Ashley Street. The graduates represented Old Stanton High, Stanton Vocational and New Stanton High schools.  It is the fourth structure erected on the site.

In 1868, a hand full of freed slaves purchased this Duval County property for $800 and directed the development of its first school in 1869. This was the first time in a half decade graduates of the school have had the opportunity to formally visit the building. Local alum, Kenneth Reddick organizes an annual gala for all Stanton grads as an opportunity to fellowship and commemorates the schools rich history.

Reddick remarked, “This a great opportunity for graduates to see the for development of the site, especially those live out of town.”  Out of town graduates visiting the site were Gwen and Bill Williams of Hampton, VA; Francena Hardwick Calhoun of East Orange, NJ; and Nathaniel Jackson of St. Augustine, FL.

The Historic Stanton Board of Trustees was delighted with the idea according to 1943 alumnus Dr. C.B. McIntosh, who manages the property and 1947 alumnus Priscilla M. Williamson, board secretary. “There should be more of this type of activity on the part of the board to fully involve the graduates in the future of this property” said Williamson .

During the event, Dr. McIntosh mentioned the dire need for alumni contributions in order to secure larger donations to meet seven million dollar renovation/construction goal. The grads discussed strategies for fundraising as planning associated with events like the September 17th Building Rededication.

The group also had the chance to see the occupied tenat areas of the 18,000 square feet school, which now houses the Jacksonville Centre of the Arts, a pre-professional preparatory school for dance art, and Pampered Prodigy, Early Learning Center for Infants and toddlers. 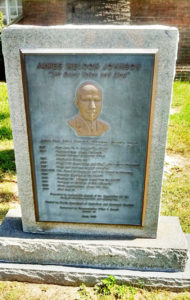