Guest speakers inspired and encouraged attendees to love and support today’s youth and to reclaim their communities by working together to overcome adversities.  The reunion committee is tasked with continuing the legacy of Coach Bryant, a former coach who started his career at SJP in 1955 and continued until the 80’s when he retired from the City of Jacksonville Parks Dept. “For over three decades Coach Bryant coached local children at the park. We had swimming lessons, played sports and engaged in cultural activities,” said organizer Yvonne Brockington.

She added, “He was also a father figure to many of the kids in the neighborhood.” Simonds-Johnson Park is located at the intersection of 12th Street and Moncrief Rd. in northwest Jacksonville. Many neighborhood youngsters have benefited from the park’s athletic programs including professional athletes Ken Burroughs of the Houston Oilers and Leonard (Truck) Robinson of the Washington Bullets.

A community center was built on the grounds in 1957, and the facility received major renovations in 1993. The committee will host a reunion weekend celebration scheduled for September of this year. 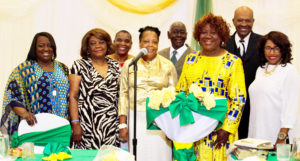