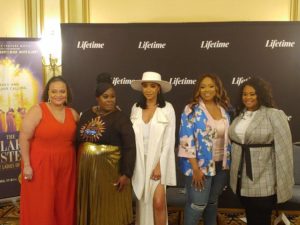 A desire by filmmaker Dr. Holly Davis-Clark to honor the musical contributions of The Clark Sisters will come to its end April 11, 2020 at 8 p.m. ET when Lifetime airs an original biographical movie The Clark Sisters: First Ladies of Gospel, executively produced by Dr. Clark via her Revele Entertainment, along with music industry icons Queen Latifah, Mary J. Blige and Missy Elliott, plus Loretta Jones and Shakim Compere via his Flavor Unit. The film covers a certain time in the long history of the pioneers of Urban Contemporary Gospel.

In 1966 the children of Detroit Choir Director Dr. Mattie Moss-Clark – Jacky (18), Denise (13), Twinkie (12), Dorinda (9) and Karen (6) – formed a Gospel group. At a certain point Dr. Mattie gave the group over to Twinkie who started writing songs for the group. They signed a record deal with their uncle’s label and released a debut album in 1973. By then the girls were ages 25, 20, 19, 16 and 13. It was the “Dr. Mattie Moss Clark Presents The Clark Sisters” album release that gave them recognition in the Detroit area. The following year they signed to Sounds of Gospel Records and released a live album “Is My Living in Vain” in 1974. That album stayed at #1 on Billboard Gospel Charts for an entire year.

The Lifetime Movie The Clark Sisters: First Ladies of Gospel stars Angela Birchett as Jacky; Raven Goodwin as Denise; Shelea Frazer as Dorinda; Kierra Sheard as Karen, and Christina Bell as Twinkie. Not only are these ladies excellent actresses they are wonderful vocalists as well. The Clark Sisters released 16 albums and won three Grammy Awards. Hits for The Clark Sisters include “You Brought the Sunshine” and “Expect a Miracle.”  They are noted as the highest selling female Gospel group in history.

“I got a call saying you need to audition for The Clark Sisters,” said Christina Bell about how she obtained the role of Twinkie, the 3rd oldest Clark sister.

All the ladies’ journeys that led to the role they have in Lifetimes’ The Clark Sisters took different paths.

“My career continues to evolve, especially in the past four years,” said Christina about her journey to the Lifetime Movies role. “My daughter said momma I want to move and that’s what made me move…to Dallas, Texas and literally in two week I got a call to go on tour with Fred Hammond, to go on tour with Donnie McClurkin…then go on tour with John P. Kee.”

Raven Goodwin’s journey started at age 15 with a starring role in Nickelodeon’s “Just Jordan.” She went on to star in roles on Disney Family, ABC Family and BET.

“It’s strange…that’s why I know God has moved me because each year at a different age it leveled me up a bit,” said Raven, who plays Denise the second oldest Clark sister, about her career up to this point. “At this point I’m taking the stirring wheel a little bit, making things happen for myself. I’m at that stage in my career where I know what I want and what I want it to look like.’

Angela Birchett (Broadway’s “The Color Purple”), who plays Jacky the eldest, said about her career path, “The roles I’ve been able to play have been so me. I was like, ‘When am I going to be in situations where it’s completely foreign?’”