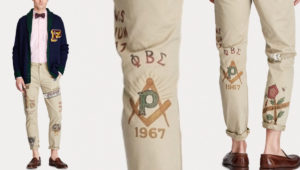 It seems that despite the fiasco caused by Burberry, Gucci and even H&M last year, designers are still not doing their homework on cultural sensitivity.  Another clothing brand seems to be having an issue and has drawn ire that includes an online petition.

According to WatchTheYard.com, a link (which has since been taken down) started circulating of Ralph Lauren’s French website, which was selling a pair of Ralph Lauren pants with the Greek letters Phi Beta Sigma on them. The symbols for the Black fraternity were located on the back of the pants in red and black. The price for such pants? 299.99 euros or 335.77 American dollars.

Folks caught wind of the expensive chinos and immediately, members of the Black fraternity and sorority community started slamming the clothing brand. Eventually, a petition even surfaced on Change.org.

“If Polo is using these beloved letters so freely, where are the royalties going? To whom did they ask & get permission to use these letters, and why did they feel so comfortable doing this,” the petition continued. “We are demanding that Ralph Lauren do the right thing and RECALL, DESTROY, & PUBLICLY APOLOGIZE for trying to capitalize off of Black Culture!”

Eventually, Ralph Lauren released a statement to WatchTheYard.com not too long after the site published their article about the fiasco.

“The use of these symbols on our products was an oversight for which we deeply apologize. We are immediately taking action to remove the product from our sales channels,” the statement reads. “While we have a rigorous review process in place for all of our designs, this has prompted us to take another review of our protocols to help ensure that this does not happen again.”

They continued, “As an American brand with more than 50 years of heritage, Ralph Lauren is inspired by many facets of American culture. As part of this, we are firmly committed to respectful and appropriate use of all cultural icons and insignias.”

Ralph Lauren isn’t the only brand that has come under fire for their clothing.

Back in February, Gucci caught serious heat when a turtleneck resembling blackface appeared on their website. The turtleneck which was black and had a red cutout for the mouth was removed from the site but not without being slammed on social media first.

The brand tweeted an apology saying the shirt was a part of a collection inspired by face masks.

In 2018, Prada was accused of racism when they released their holiday collection with a figure resembling blackface, as Blavity previously reported. The company said they “abhors racist imagery” and removed the items from their shelves.
There’s no word on how many pants the company has sold before the apology.