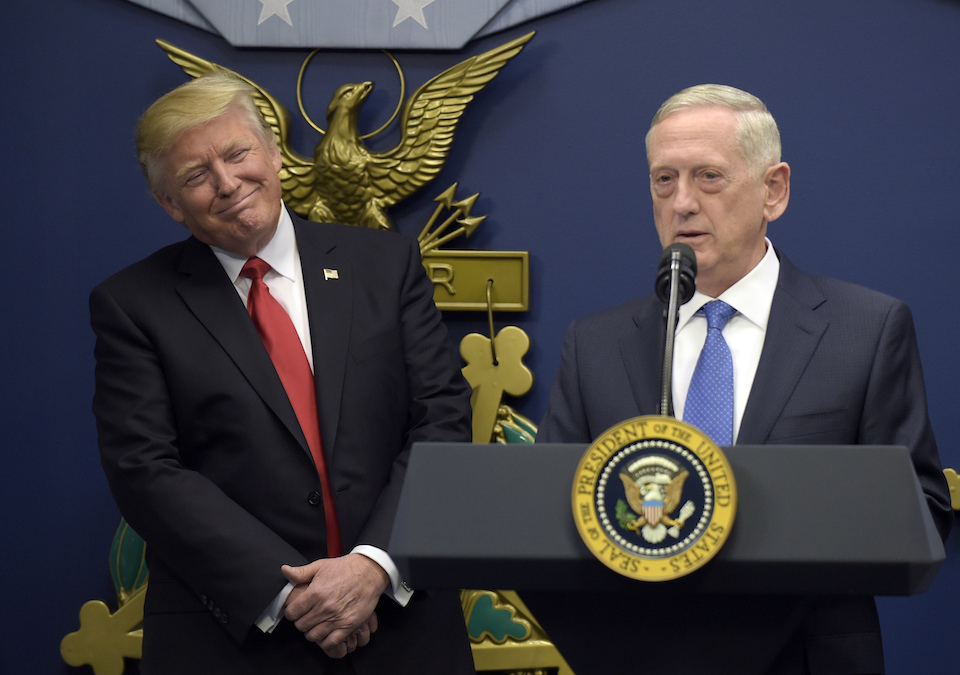 WASHINGTON (AP) — One month after the inauguration, the stretch of Pennsylvania Avenue in front of Donald Trump’s White House still is a hard-hat zone.

Skeletal remains of the inaugural reviewing stands poke skyward. Random piles of plywood and cables are heaped on the ground inside crooked lines of metal fencing.

The disarray outside the president’s front door, though not his fault, serves as a metaphor for the tumult still unfolding inside.

Four weeks in, the man who says he inherited “a mess” at home and abroad is presiding over a White House that is widely described as itself being a mess.

At a stunning pace, Trump has riled world leaders and frustrated allies.

He was dealt a bruising legal blow on one of his signature policies. He lost his national security adviser and his pick for labor secretary to scandal. He’s seen forces within his government push back against his policies and leak confidential information.

All of this has played out amid a steady drip of revelations about an FBI investigation into his campaign’s contacts with Russian intelligence officials.

Trump says his administration is running like a “fine-tuned machine.” He points to the rising stock market and the devotion of his still-loyal supporters as evidence that all is well, although his job approval rating is much lower than that for prior presidents in their first weeks in office.

Stung by the unrelenting criticism coming his way, Trump dismisses much of it as “fake news” delivered by “the enemy of the people” — aka the press.

Daily denunciations of the media are just one of the new White House fixtures Americans are adjusting to.

Most days start (and end) with presidential tweets riffing off of whatever’s on TV talk shows or teasing coming events or hurling insults at the media.

At some point in the day, count on Trump to cast back to the marvels of his upset of Democrat Hillary Clinton in the November election and quite possibly overstate his margins of support. Expect more denunciations of the “dishonest” press and its “fake news.”

From there, things can veer in unexpected directions as Trump offers up policy pronouncements or offhand remarks that leave even White House aides struggling to interpret them.

The long-standing U.S. policy of seeking a two-state solution to the Israeli-Palestinian conflict? Trump this past week offered this cryptic pronouncement:

“I’m looking at two-state and one-state, and I like the one that both parties like. I can live with either one.” His U.N. ambassador, Nikki Haley, the next day insisted, “We absolutely support a two-state solution.”

Trump’s days are busy. Outside groups troop in for “listening sessions.” Foreign leaders call or come to visit. (Or, in the case of Mexico’s president, cancel out in pique over Trump’s talk about the planned border wall.)

After the president signed two dozen executive actions, the White House was awaiting a rush order of more of the gold-plated Cross pens that Trump prefers to the chrome-plated ones used by his predecessor.

Trump hands them out as souvenirs at the signing ceremonies that he points to as evidence of his ambitious pace.

“This last month has represented an unprecedented degree of action on behalf of the great citizens of our country,” Trump said at a Thursday news conference. “Again, I say it.

There has never been a presidency that’s done so much in such a short period of time.”

That’s all music to the ears of his followers, who sent him to Washington to upend the established order and play the role of disrupter.

“I can’t believe there’s actually a politician doing what he says he would do,” says an approving Scott Hiltgen, a 66-year-old office furniture sales broker from River Falls, Wisconsin. “That never happens.”

But there may be more sound and fury than substance to many of his early actions.

Trump did select Judge Neil Gorsuch to replace the late Antonin Scalia on the Supreme Court, a nomination that has drawn strong reviews from conservatives.

But the president is regrouping on immigration after federal judges blocked his order to suspend the United States’ refugee program and ban visitors from seven Muslim-majority countries, which had caused chaos for travelers around the globe. Some other orders on issues such as the U.S.-Mexico border wall and former President Barack Obama’s health care law are of limited effect.

Trump says his early actions show he means to deliver on the promises he made during the campaign.

“A lot of people say, ‘Oh, oh, Trump was only kidding with the wall,'” the president told a group of police chiefs recently. “I wasn’t kidding. I don’t kid.”

But the Republican-led Congress is still waiting to see specifics on how Trump wants to proceed legislatively on top initiatives such as replacing the health care law, enacting tax cuts and revising trade deals.

The messy rollout of the travel ban and tumult over the ouster of national security adviser Michael Flynn for misrepresenting his contacts with Russia are part of a broader state of disarray as different figures in Trump’s White House jockey for power and leaks reveal internal discord in the machinations of the presidency.

“I thought by now you’d at least hear the outlines of domestic legislation like tax cuts,” says Princeton historian Julian Zelizer. “But a lot of that has slowed.

Trump shouldn’t mistake the fact that some of his supporters like his style with the fact that a lot of Republicans just want the policies he promised them. He has to deliver that.”

Put Senate Majority Leader Mitch McConnell, R-Ky., in the camp of those more interested in substance than style.

“I’m not a great fan of daily tweets,” McConnell said Friday, referring to the “extra discussion” that Trump likes to engage in.

But McConnell was quick to add: “What I am a fan of is what he’s been actually doing.”

He credits Trump with assembling a conservative Cabinet and taking steps to reduce government regulation, and promised: “We like his positions and we’re going to pursue them as vigorously as we can.”

The challenge may be to tease out exactly what Trump wants in the way of a health care plan, tax changes and trade policy.

At his long and defiant news conference on Thursday, Trump tried to dispel the impression of a White House in crisis, squarely blaming the press for keeping him from moving forward more decisively on his agenda.

Pointing to his chief of staff, Reince Priebus, Trump said, “You take a look at Reince, he’s working so hard just putting out fires that are fake fires. I mean, they’re fake.

For all the frustrations of his early days as president, Trump still seems tickled by the trappings of his office.

When New Jersey Gov. Chris Christie recently visited the White House to discuss the national opioid epidemic over lunch, the governor said Trump informed him: “Chris, you and I are going to have the meatloaf.'”

Trump added: “I’m telling you, the meatloaf is fabulous.”