The four-time gold medal sprinter finished her first 5K at Walt Disney World Resort – Olympic track and field champion and reality TV star Sanya Richards-Ross finished her very first 5K during Disney Wine & Dine Half Marathon Weekend that took place Nov. 4-6 at Walt Disney World Resort. She was among thousands of runners who took part in the weekend that also included a 10K, half marathon and Two-Course Challenge (10K and half marathon). 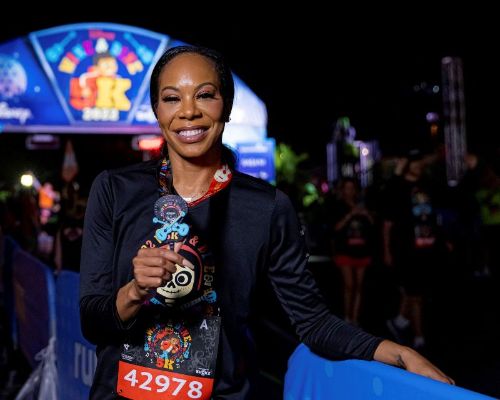 In addition to the race, Richards-Ross stopped by ESPN Wide World of Sports Complex for a meet-and-greet with fellow runners at the runDisney Health and Fitness Expo on Thursday. She also shared an inspirational message to the runners ahead of the 5K on Friday.

Richards-Ross, who won four gold medals in the 400-meter and 4×400- meter relay at three Olympic Games from 2004 – 2012, remains one of track and field’s most decorated female athletes. Since her retirement in 2016, she has gone on to become a track and field TV analyst and reality television personality. She is currently starring in the hit reality show The Real Housewives of Atlanta.

Throughout the weekend, more than 30,000 runners took part in the Wine & Dine races.  Sunday’s half marathon was themed after the Disney Pixar motion picture Soul. Racers experienced jazz music throughout the course and received a medal featuring the movie’s title character Joe Gardner.

Wine & Dine is the first of four race weekends during the 2022-23 runDisney season. Next is the 30th anniversary of the Walt Disney World Marathon Weekend (Jan. 4-8), the 15th anniversary of the Disney Princess Half Marathon Weekend (Feb. 23-26), and the runDisney Springtime Surprise Weekend (April 13-16). These races, which include runners of all fitness levels, provide the opportunity to run through Disney theme parks, experience world-class entertainment and earn unique Disney medals.

To register and for more info email: Joel at  TJM Communications: joel@tjmcommunications.com