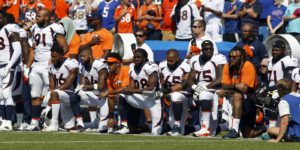 by Nancy Armour via usatoday.com

Empty sidelines in Nashville and Chicago. Jacksonville owner Shad Khan standing arm in arm with his players. The Miami Dolphins wearing “I’m With Kap” T-shirts during warm-ups. Oakland Raiders owner Mark Davis eloquently explaining his change of heart about players protesting during the national anthem. The NFL had one of its finest moments before the games even began Sunday, coming together from every corner – players, coaches, owners and league office – in forceful rebuke of the latest torrent of hate from President Donald Trump.

Whether black, white or brown, on bended knee or with locked arms, the NFL’s rare show of unity was both a dignified condemnation of the wrongs we still must right and a reminder that, for all of our differences, America remains our common ground. “Over the last year, though, the streets have gotten hot and there has been a lot of static in the air and recently, fuel has been added to the fire,” Davis said in a statement. “… Not only do we have to tell people there is something wrong, we have to come up with answers.“That’s the challenge in front of us as Americans and human beings.”

Be it Jackie Robinson, Muhammad Ali, Billie Jean King or Magic Johnson, sports has long been the prism through which we see society. And fondly as we regard those trailblazers now, that wasn’t always the case. Changing hearts and minds, getting people to shed their stereotypes and ignorance, took sacrifice, anger and, yes, even protest.

In that way, the NFL’s league-wide show of unity was merely the latest in a long history of sports and activism being intertwined. It wasn’t even particularly radical when measured against the outspokenness and activism by current NBA players and coaches.

But what made Sunday so stunning was how out of character it was, a seismic shift for a league that has been loath to allow any kind of individuality or personal expression. The NFL barely tolerates touchdown celebrations, let alone a call to acknowledge the pervasive racism that marginalizes a good portion of our country.

Maybe that’s what Trump was counting on with his remarks Friday — and again Saturday and Sunday — that were as ignorant as they were inflammatory, yet more racist dog whistles for his base. Perhaps he figured the league that has effectively blackballed Colin Kaepernick would let his thinly veiled bigotry pass in uncomfortable silence.

But the NFL showed Sunday that Trump has badly overplayed his hand.

“We will not stand for the injustice that has plagued people of color in this country,” the Seattle Seahawks said in a statement announcing that the team would stay in the locker room during the national anthem.

Even in a league where blinders might as well be part of the uniform, it was not lost on anyone that Trump found a way to defend Nazi protesters yet called Kaepernick and anyone else who protested during the national anthem a “son of a (expletive).” Ditto for his history of calling out and criticizing people of color while letting egregious behavior by whites go unchallenged.

The demonstrations by Kaepernick and the other players who have joined in are not about the national anthem or the military or the flag. They never have been. They are about the racism that continues to be pervasive in our society, manifesting itself in police brutality, economic inequality and disparity in education and opportunity.

No one is naïve enough to assume the NFL will now be the standard bearer in this latest fight for civil rights; moving as all the demonstrations were, it did not go unnoticed that the theme was “unity” rather than inequality, and that very few white players took a knee.