African American women are leading the charge for Breast Cancer awareness to eradicate the stigmas, myths and rumors in urban and rural communities. Recently, inside the American Legion 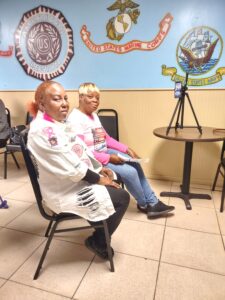 Post 197 located in the Edgewood/Ave B community, women gathered to hear speakers, network and fellowship during a quaint catered luncheon. Speaker Angela Harris discussed her breast cancer journey that began when she scheduled an appointment for a breast reduction.  Waiting on the doctors for the pathology report prognosis and next steps, doctors discovered she had metastatic cancer in both breast. Metastatic cancer is the spread of cancer cells from the place where they first formed to another part of the body. “I was told that if I would not have scheduled the breast reduction surgery, then I may not have known I had breast cancer. I was mad about the breast reduction, yet happy to know that the cancer was found,” said speaker Angela Harris. The luncheon was spearheaded by veteran and organizer Joanne Miller.  “We learned a lot, this workshop session was very informative. I was impressed with her honest testimonial and what she had to go through. By the help of the Lord she is still here,” said attendee Alberta Burney.

One in eight women will be diagnosed with breast cancer and one in three of those will become metastatic.  Breast cancer mortality is 38% higher for black women (37 per 100,000) in Duval County, than for white women (24 per 100,000).