Not too long ago in American history women were relegated to only serving in the armed forces as nurses. The hundreds of thousands of women who had served their country during World War II were expected to walk away from their military service and rejoin civilian life. But in 1948, that all changed when women took an essential first step toward becoming equal members of the U.S. Armed Forces.

Fast forward some 70 years later and women are represented in every area of military leadership and skillsets.  Locally, Lieutenant Colonel Yasmeen Neal is the Army National Guard Army Chief of the Resource Management Branch, Strength Maintenance Division. She is responsible for programming the recruiting requirement for national recruiting efforts and the operations for 54 Recruiting and Retention Battalions.

She has been an inspiration of other officers, especially women looking to advance into military leadership. Last week, a promotion ceremony was held at NAS Jax to award and pin Neal with her decorations of service. Colonel Greg Cardenas, Chief of Staff for the Florida National Army guard presented the pins to Neal and spoke highly of her achievements and years of military service accomplishments.

The Lt. Colonel was supported by family and friends during ceremony, and she is the daughter of Jacksonville natives and Raines graduates Joseph and Maria Nixon. Neal was born in Jacksonville and raised in Orlando.

As if she wasn’t busy enough with her military service, Neal is the founder and Director of FLY Minds Youth Development program and enjoys traveling and power boarding in her spare time.

Shown is  Neal smiling at her pining ceremony. 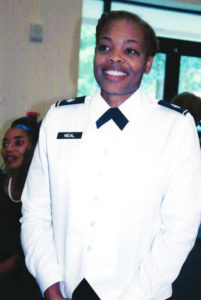