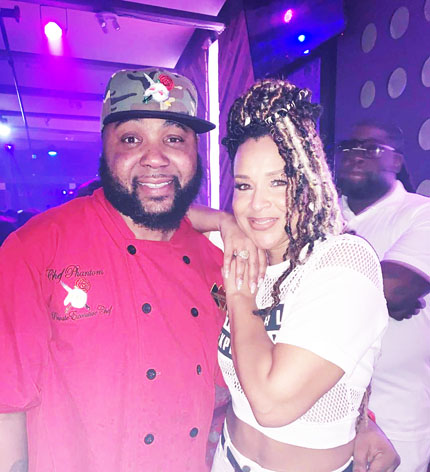 Actress Lisa Raye, made a made Memorial Day weekend appearance at the Live Bar in downtown Jacksonville. Raye, known for her all white attire, hosted the inaugural “White Affair,” with fans and friends, posing for photos and the opportunity to taste the cuisine of Chef Phantom.

After serving 10 years in the Navy, Chef Phantom is now a local transplant and is making a name for himself in the celebrity chef-catering business. According to the chef, his Lisa Raye admiration started at the age of seven when he viewed the movie “The Players Club.” Fast-forward 20 years later, and his Hollywood idol was now enjoying his world-class cuisine.

“When I tell you she is the most kind hearted person ever. I’m thankful and no I didn’t call her diamond (from the movie),” said Phantom.

Shown are Chef Phanom and Actress Lisa Raye posing for the camera at the White Affair.