“Buyi Zama is no stranger to The Lion King, having performed as Rafiki in Las Vegas, Taiwan, South Africa, Shanghai, Australia, and the West End before moving to Broadway. For her role, she has won an Australian MO Award for Female Musical Performer and was nominated for an Australian Helpmann Award for Best Female in a Musical” (Broadway. com)

Now she’s coming to Jacksonville to star in “The Lion King” touring production. As a performer Zama has logged many hours and 16 years on stage, “the Lion King is a story that resonates with children and adults,” said Buyi. With a baby due in May, Buyi is excited for Jacksonville to witness her role as  “Rafiki,” the Baboon.  Buyi remarked that “Rafiki” means “friend”!  As a friend and advisor Rafiki has seen it all! Get your tickets now for ‘The Lion King,” appearing at the TimesUnion Center now till February 11th. (phot0 credit: Getty Images) 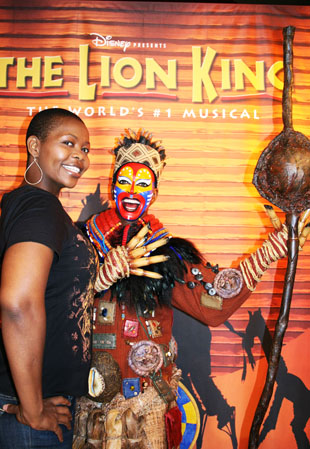