By Rosemary Feitelberg  – The vice president-elect will be the first female, Black and Asian American in that role.

COVER CAUSES DISPUTE: The just-released Kamala Harris cover for the February edition of Vogue has already attracted reams of attention, not all of which was expected.

The Vice President-elect is also featured in a lengthy profile by Alexis Okeowo, which is understandably heavy on Harris’ experience and White House objectives, and scarce on fashion references. The controversy around the story centers on the choice of photography, more specifically the cover image of Harris wearing a Donald Deal jacket and Converse sneakers with a backdrop of colors that are emblematic of her sorority at Howard University, Alpha Kappa Alpha. Some social media critics questioned the decision to feature the first female vice president as well as the first Black and Asian American to be elected to that role wearing sneakers — even though she regularly wears them with her outfits, including on the campaign trail. They described the photo as “disrespectful,” “poor quality” and “a washed-out mess.”

Lensman Tyler Mitchell photographed Harris. (In 2018, Mitchell became the first African American photographer to land a Vogue cover, which was the September one.)

In addition, politicking of a different kind can often happen with magazine covers, as in certain designers and advertisers carry more weight than others, and the cover star’s team may want to 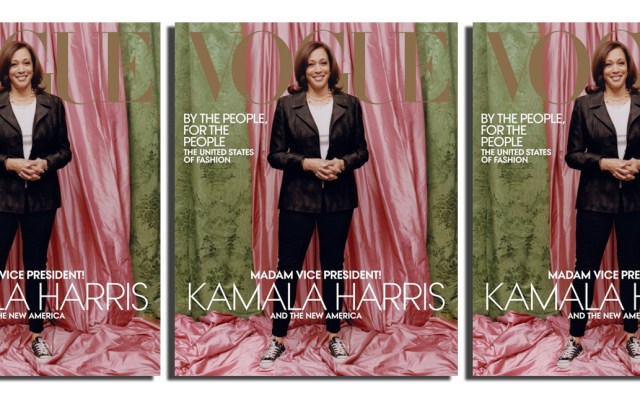 control the narrative. Harris’ Vogue cover generated a social media debate that claimed that a photo of her wearing a powder blue suit by Michael Kors, which is featured with the interview, was the image that was agreed upon by both parties. Some on social media speculated that the more flattering photo of Harris wearing Kors would have been the better cover choice.

A Vogue spokeswoman said, “The team at Vogue loved the images Tyler Mitchell shot and felt the more informal image captured Vice President-elect Harris’ authentic, approachable nature, which we feel is one of the Biden/Harris administration. To respond to the seriousness of this moment in history, and the role she has to play leading our country forwards, we’re celebrating both images of her as covers digitally.”

While the team at Vogue selected the print cover, it appears the public helped Harris secure a second digital cover. The Vogue and Harris camps were said to have worked closely together with Harris selecting what she wore.

Such media exposure is old hat for Kors, who is accustomed to dressing high-profile politicos and celebrities. The more under-the-radar Deal may not be a go-to resource for many A-listers, but he does go way back with Harris. The New York-based designer has suited her up for key appearances along her career path, from district attorney of San Francisco to California attorney general and California senator.

Without question, the Harris interview is meant to make readers focus on her experience and priorities, such as getting everyone vaccinated, making sure some vaccines are free, bolstering small businesses and supporting mayors and governors to strengthen the public health systems. There is also an editorial note that references how the article has been updated to reflect recent news events.

Former First Lady Michelle Obama also praised Harris in the article. “This is a woman, who knows what she’s doing. It can’t be about trying to please everybody or prove to certain people you’re good enough for the job. And the vice president wouldn’t be where she is today if she let that kind of thing get to her.”

In other political-related news, Stephanie Winston Wolkoff, a former aide to First Lady Melania Trump, penned a scathing op-ed for The Daily Beast, claiming that FLOTUS is “an abuser, too, of a different kind” and “a double-edged sword.” Having written a tell-all, “Melania and Me: The Rise and Fall of My Friendship With the First Lady,” last fall, Wolkoff has re-engineered her criticism in recent months. In her recent post, she takes responsibility for being “Melania’s enabler,” and claimed that FLOTUS “knows exactly what is going on” and has always had her own agenda.

A spokeswoman for FLOTUS did not respond to a request for comment Sunday.

For more on the original article visit: https://wwd.com/fashion-news/fashion-scoops/kamala-harris-vogue-cover-creates-controversy-1234693034/