When we hear about gang plagued cities filled with violence, we usually think of northeastern areas. Jacksonville however got a rude awakening last weekend beginning with a high school football game at Raines High School leaving one dead and three injured and culminating with a melee at the Jacksonville Landing at a Gamers Tournament killing four. The result may have ended high school football on Friday nights as we know.

The Duval County School Superintendent announced that moving forward, highly anticipated games will now be held on Thursday evening or Saturday mornings. The announcement comes four days after 19-year-old Joerod Adams was shot and killed after the Raines High vs. Lee High season opener on Aug. 24. Around 4,000 people were at the game where two others were wounded. All three are believed to be gang affiliated.

16-year-old Robert Howard has been charged in the triple shooting.

On Saturday, at the Jacksonville Landing, Video game competitors Eli “Trueboy” Clayton and Tayor “SpotMePlzzz” Robertson were among those killed after gunman David Katz of Maryland opened fire during an esports tournament.

Competitors were participating in the southern qualifier of EA Sports’ “Madden 19” championship series, a video game tournament. Nine others were injured. The suspect died of a self-inflicted gunshot wound.

In response to the traumatic weekend, local organizations, nonprofits, members of the faith based community took to the steps of City Hall to protest gun violence, transgender killings and police brutality.

Speakers included Ron Davis, father of Jordan Davis who was gun downed at a gas station in 2012 following an argument over loud music.  Davis spoke briefly about lifting up your fellowman, “Lifting up one another is the first step to healing a community.” Attorney and Pastor Phillip Baber, riled up the crowd  raising eyebrows with his mini-sermon stating, “We can’t pray crime away”.  Northside Coalition President Ben Frazier was fierce in his comments. “We must come together in unity, as we endure one of the most violent periods in the history of our city,” said Frazier.  The sparse crowd rallied around speakers and promised to fight for solutions and change. Some suggested solutions included: increased security screenings at large scale public events; better gun control laws to combat violence; creation of wide-ranging prevention programs;community-involvement strategies and launch conflict resolution initiatives.

Speakers also stressed the important roll that education and schools play in our current climate and acknowledged the role that politics, economics and racism play in creating public policy and laws.

Shown in the crowd on the steps of city hall (l-r) is Ben Frazier, Ron Davis, and Pastor Phillip Baber speaking to the crowd. 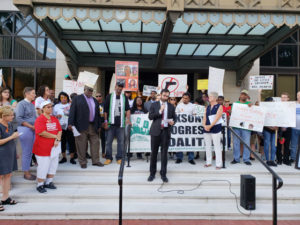