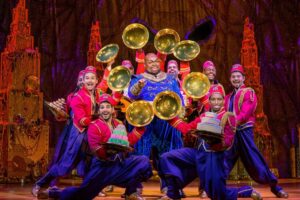 Currently on stage in the national tour of Disney’s Aladdin in West Palm Beach, Florida, actor and Jacksonville Beach native, Joshua Johnson, shared “I’m revved up and ready to bring the show to Jacksonville.”  Johnson attended Episcopal High and graduated from Douglas Anderson School of the Arts (DASOTA) in 2017. Always a dreamer, Johnson began his journey in local theater and summer group musicals. As destiny would have it – in 2021 he signed with an agent and began touring in the Pretty Woman stage play production. Since August of this year, Johnson has taken on the persona of various characters in the new adventure Disney’s Aladdin, presented by FSCJ Artist Series, January 10- 15th. Johnson shared, ‘I’m a little bit of everywhere on the stage, in the marketplace, an attendant at the well, it’s amazing,” shared Johnson.

Reminiscing on his childhood dreams and what it takes to make it the entertainment industry, Joshua beamed, “Know that you have to show up and you will find what you are looking for. I was told to be the most prepared person in the room.” Striving for theatrical excellence, Johnson is currently based in NYC, with his roots belonging to DUUVAL! With lofty goals for 2023, Johnson goal is to continue honing his craft and giving back to his community, ‘I’m living the dream,” smiled Johnson.