Breaking news
Dining Experience Dialogue Engages Culture Differences and Tradition
“Community Suppers,” an initiative that OneJax and the Jacksonville Chamber are currently occurring throughout Jacksonville. The causal randomly organized dinners consist of a  small group of local diners hosted by community leaders in restaurants around the city in order to bring a variety of people together to break bread and hear different perspectives about inclusion and diversity.  Now in its third year, the Community Suppers engage dialogue on what needs to happen in our community to build a more inclusive society.
This week’s event was hosted at Uptown Grill on Main Street in Springfield by Darnell Smith, Florida Blue’s market president for the North Florida Region.  Host location was Uptown Grill on Main Street in Springfield. Once the rules were read and questions were presented, the guests introduced themselves followed by Smith as the moderating the pre-planned questions for the eleven individuals. Topics included mental health, gun violence, news media, religion and family traditions which spurred creative and encouraging dialogue.
Guest paid for the cost of their own meals and also sampled each other’s ordered cuisine. “Community Suppers is the opportunity to get into a small space and discuss things that matter and what drives us,” said Smith. The two hour suppers will be held throughout the month of October.  Shown at the One Jax Community Supper roundtable (l-r) is: Lynette Jones, Charlotte Hughes, Christine Levine, Darnell Smith, Carter Elliott, Christine Levine, Joe T. Black, Bud Para, Terri George, Ellen Thrower, and Barbra Barrett. 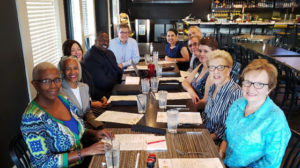