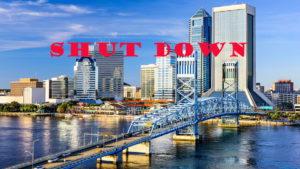 As concerns and contractions regarding the coronavirus continue to grow, Jacksonville closures have been added to the national list of closures following a signed a declaration of emergency for Duval County by Mayor Lenny Curry.

All city facilities and events in Jacksonville are included in the closure such as TIAA Bank Field, VyStar Veterans Memorial Arena, the Times Union Performing Arts Center, Jacksonville Zoo, all libraries, public parks and the Prime Osborn Convention Center.

“In addition, I have ordered city departments to immediately suspend all permits for large gatherings and stop such gatherings at city parks or in city property, through the end of the month,” Curry said during a Friday news conference.

At the news conference, Curry also shared an 83-year-old man  living at a senior living facility near the Town Center had been infected. He is being treated at Memorial Hospital.

“The actions I have taken, and those I will be taking moving forward will be those that are thought most effective by local experts for preventing or slowing the spread COVID-19,” Curry said.

Duval County Public Schools, currently on spring break, will have an extended break for another week.  The extended break allows the schools to better prepare and implement mitigation strategies to help prevent the community spread of the virus. Classroom instruction is expected to resume on Monday, March 23.

Supervisor of Elections Mike Hogan said all Early Voting Sites, including Libraries will remain open for voting through Sunday March 15th.  Libraries and Fire Stations that are designated as a Voting Precinct on Election Day will be open on Election Day. The Jacksonville Sheriff’s Office has also suspended inmate visitation.

President Donald Trump declared the coronavirus pandemic a national emergency on Friday  in order to free up more money and resources. The act unleashes as much as $50 billion for state and local governments to respond to the outbreak.

He also  took a number of other actions to bolster energy markets, ease the financial burden for Americans with student loans and give medical professionals additional “flexibility” in treating patients during the public health crisis.

The President waived interest on federally held student loans and moved to prop up energy markets, by directing the Department of Energy to buy oil to fill the strategic petroleum reserve “’right up to the top.” He said he was giving Secretary of Health and Human Services Alex Azar emergency authorities to waive federal regulations and laws as needed, for instance, to allow doctors to practice tele-medicine across state lines.

Nationally everything has been shit down from professional tournaments in golf, the NBA and MLB to Disney Theme Parks.

The Center for Disease Control says the best way to stay say if to keep a social distance from others and your hands washed.