Jaguars cornerback Jalen Ramsey has been controversial since he entered the NFL.  But the often outspoken all pro does more than talk trash and play football.  Ramsey is also committed to giving to children in need, and this is certainly the season for giving.

Last week, he gifted 50 children from the Boys & Girls Club of Northeast Florida with 50 bicycles and 50 signed footballs for this holiday season.

For many of the boys and girls participating, the bikes received will be their first ever according to Boys & Girl Club staff. Ramsey is not the only Jaguar in the holiday spirit this Christmas.  Fellow cornerback D.J. Hayden took 30 kids from Ramona Elementary on a shopping spree at Academy Sports.

And all pro defensive lineman Calais Campbell sponsored a shopping spree and hosted 40 kids from Northwestern Middle School at Target. 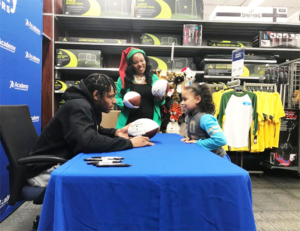