A group of Jacksonville teens have decided to be change agents and have made fighting homelessness – especially amongst their peers a key area of focus.

At a time in Duval County when youth violence has become an issue, teenagers from the I’m a Star Foundation are doing their part to help families and peers in need by raising funds that directly assist in fighting homelessness.

Last week, teen servant leaders presented a check for $30,000 in front of the Duval County school board. The groups effort has totaled some $126,500 raised since their grassroots mission began.

All funds raised were donated to the Families in Transition Department of the school district, which provides resources such as rental, doctor and school fees to students without stable homes during the year. The money also goes towards scholarships for homeless students aspiring for college.

I’m A Star kids came up with the basketball game as a fundraising idea in 2012, after learning nearly 1,900 students in the school district were considered “homeless” because of their living conditions.

Today, that number has grown to more than 3,000 school-aged children living temporarily with relatives, in shelters, hotels, cars or on the streets. Brianna Henderson, a 15 year old student, recalls the shame she faced when her mother lost her job, displacing their family. “When I went to the shelter I was crying. I was like why is this happening to me? What did I do to deserve this,” Henderson said.

She added, “Now everyone’s going to know, they’re going to make fun of me. My life is over.”  Henderson later joined I’m A Star, and began working with other students in planning the celebrity basketball game and other events.

Another student, 16-year-old Robbi Jones, says learning about the stories of her peers empowered her. “I want people to know that no matter who you are, no matter what you go through, if there is a problem, we want to help fix it,” Jones said. “So, if you are too shy to tell us, it’s fine. But we just want you to understand that we want to help.”

An acronym for “Smart, Talented And Resilient” students, I’m A Star Foundation Executive Director Betty Burney says it’s about students reaching their potential through helping each other. “I want them to know the essence of leadership is service to mankind,” says Burney. 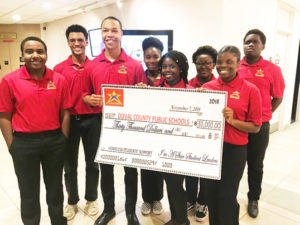