By Julie Garcia – New research shows there were 80,000 missed diagnoses of cancer in the U.S. between March and June.

According to IQVIA Institute for Human Data Science, cancer screenings decreased by 90 percent in April compared to February’s numbers. The rate of colonoscopies dropped by 90 percent; Pap smears, 83 percent; prostate-specific (PSA) tests, 60 percent; and CT scans (which show lung tumors) were down 39 percent.

Mammograms were down 87 percent, which is a major concern for Dr. Jessica Treviño Jones, breast oncologist with Memorial Hermann Cancer Center and UTHealth. One in eight women will develop breast cancer in her lifetime, according the American Cancer Society. 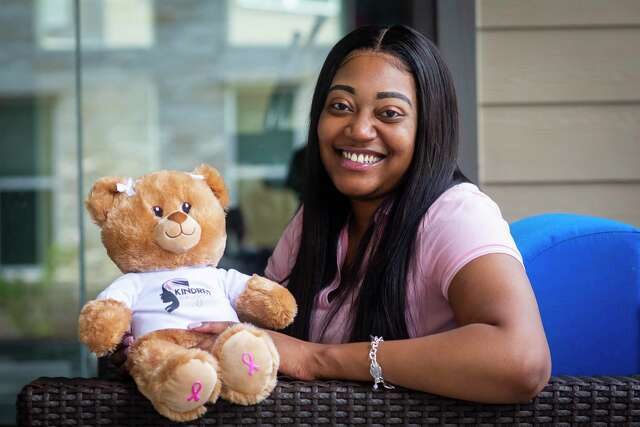 Chealci Eddins is an Aldine math teacher whose Stage 3 breast cancer was diagnosed at the beginning of the pandemic. She underwent chemotherapy and a mastectomy during the first peak of the coronavirus at Memorial Hermann.

A mammogram is the best screening modality to catch cancer, Treviño Jones said. She believes breast cancer will be the one to flare the most post-COVID.

“The reason why we can find and cure breast cancer is because we have success in catching it early,” she said. “Every woman not getting a mammogram, we’re falling behind. How many are we missing? So many.”

Chealci Eddins had just turned 27 when she found a lump on her breast last summer. It took only four months for the small tumor to grow to 5.67 centimeters, which is roughly the size of a peach.

As a mother, teacher and coach, she had an active, healthy lifestyle before her breast cancer diagnosis on Jan. 8. She began chemotherapy treatments on Jan. 24.

“With how aggressive my cancer was, I went into survival mode,” said Eddins, who is now 28. “I knew my grandmother and great-grandmother had breast cancer, so knowing this, I didn’t allow myself to be blind. I looked things up and compared my options.”

By her fourth cancer treatment, the coronavirus began spreading in the Houston area, and the rules changed about visitors. She said going through chemotherapy alone was an emotional drain.

Chealci Eddins is an Aldine math teacher whose Stage 3 breast cancer was diagnosed at the beginning of the pandemic. She underwent chemotherapy and a mastectomy during the first peak of the coronavirus at Memorial Hermann.

Telemedicine appointments were another change that she had to get used to, she said. But she had no time to lose in adjusting.

“For a person who hasn’t been to a doctor as often, they may not be comfortable with talking to a doctor over the phone. A lot of women have this misconception that you can do it later,” Eddins said. “But this is something you cannot wait until later to do, especially with minority women, in particular, because breast cancer is so aggressive.”

According to the American Cancer Society, breast cancer affects non-Hispanic white people the most at 130.8 per 100,000, followed closely by non-Hispanic Black people at 126.7 people per 100,000.

However, Black women have the highest breast cancer death rate at 28.4 deaths per 100,000.

Fearing a cancer recurrence later in life, Eddins opted for a June double mastectomy after she finished chemotherapy. She said the decision was made for her 3-year-old daughter, Rylie Simpson.

Because of COVID concerns, no friends or family could be with her at the hospital.

“Having to get someone to drop me off in the Memorial Hermann parking garage at 5 a.m. and then see my surgeons and doctors to prepare for the surgery was a lot,” Eddins said. “More emotional and social support is needed right now. People feel so alone.”

Dr. Charles E. Geyer, deputy director of Houston Methodist Cancer Center, said Houston hospitals have worked to try to minimize the exposure of cancer patients by restricting the number of people entering to those who need treatment.

In late March, some cancer-related surgeries were performed ahead of schedule or postponed depending on the severity. Those practices were brief, and specialists continued to serve their patients like they did pre-COVID but with extra safety precautions, Geyer said.

National Cancer Institute Director Dr. Ned Sharpless wrote in June that there will be 10,000 more breast and colorectal cancer deaths in the next decade that will be indirectly caused by the virus.

“Fear of contracting the coronavirus in health care settings has dissuaded people from screening, diagnosis and treatment for non-COVID-19 diseases. The consequences for cancer outcomes, for example, could be substantial,” Sharpless said. “At many hospitals, so-called ‘elective’ cancer treatments and surgeries have been de-prioritized to preserve clinical capacity for COVID-19 patients.”

During peak months, patients received less intense chemotherapy and/or radiotherapy or had their tumor removal delayed, Sharpless said, which will result in the pandemic causing “delayed diagnosis and sub-optimal care for people with cancer.”

When Treviño Jones heard the term “non-essential surgeries,” she said it made her think cancer was considered “non-essential.” None of her patients had delayed surgical procedures because of coronavirus concerns, she said.

“Curing someone and saving their life is essential,” Treviño Jones said. “If you’re a woman diagnosed with breast cancer, we try to gauge the right treatment for you in this crisis. Your cancer diagnosis is a crisis.”

But a person can’t get treated for cancer if they never a diagnosis because they skipped a regular screening. Geyer worries about the impact of delayed cancer screenings.

“Screening has been beneficial, so if people are slower to move to treatment because of fears of catching coronavirus, we worry about what might happen in terms of cancers,” Geyer said. “When you detect it early, treatments are less challenging for patients.”

Eddins caught her cancer early, in addition to finding out she has the BRCA1 mutated gene, also known as the breast cancer gene. She is now awaiting breast reconstructive surgery and radiation treatments.

But she is also preparing for a new school year as an educator after months in treatment.

“The last moment I had with my ninth grade students last year was right before spring break. They made me posters and TikToks — it was a joy,” Eddins said. “I’m still Ms. Eddins, still 27 (now 28), and I’m not about to let cancer age me at all.”

For more on this article that first appeared at: https://www.houstonchronicle.com/lifestyle/renew-houston/health/article/research-shows-missed-cancer-diagnosis-this-year-15472913.php