By Clarissa Hamlin (Source NewsOne) – Chrissy Teigan and her husband John Legend recently lost their child after she experienced a miscarriage. 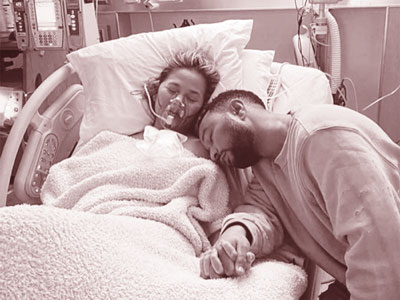 Chrissy Teigan and her husband John Legend have lost their child after she experienced a miscarriage, the model announced in an emotional Instagram post early Thursday morning. The couple had already named their child Jack and Teigan wrote a heartfelt message to him that prompted an outpouring of support for her across social media.

“To our Jack – I’m so sorry that the first few moments of your life were met with so many complications, that we couldn’t give you the home you needed to survive,” Teigan wrote. “We will always love you.”

Teigen was about halfway through her third pregnancy when she went to the hospital after experiencing bleeding last week.

She has been candid about her past struggles with post-partum depression following their birth of her and Legend’s daughter in 2016. She wrote in Glamour in 2017 that she was “speaking up now because I want people to know it can happen to anybody and I don’t want people who have it to feel embarrassed or to feel alone. I also don’t want to pretend like I know everything about postpartum depression, because it can be different for everybody. But one thing I do know is that—for me—just merely being open about it helps. This has become my open letter.”

Just like back then, it will be paramount for Legend to be there for his wife to support her, similar to how in 2018 Erica Campbell, a Grammy-winning gospel singer and star of TV One’s “We’re The Campbells,” said she leaned on her husband after having her own miscarriage.

Campbell, like Teigan, used her public platform — an episode of her show — to reveal what she was going through physically and emotionally.

At the time, viewers saw and heard an openhearted Campbell talk about her miscarriage and how she once contemplated suicide. Campbell discussed her miscarriage — the traumatic loss of pregnancy that happens to Black women at higher rates than their white counterparts — with a trusted friend during the episode. The singer, like many other Black women, put on a strong front for the world after the emotional event, saying she didn’t take the time to properly grieve and kept it moving. More women should talk about the experience, with the “hardest part” being the “falling out of love” with your baby that you “fell in love with,” she also said.

A transparent Campbell also detailed her fight with depression and suicidal thoughts as a 12-year-old teen in another moment during the poignant episode. Warryn Campbell, her husband, was shocked to hear that his wife had contemplated taking her own life. (African American adults are 20 percent more likely to report serious psychological distress than adult whites, and Black teens are more likely to attempt suicide than white teens according to Mental Health America.)

However, the singer’s story served as a testimony that she survived and went on to have a joyous life as a wife, mother and successful music artist.

It is women like Campbell and Teigan who show the power of opening up about painful experiences to your inner circle and how healing is an attainable goal. There are also organizations and resources that women can turn to for help. Here are steps Black women can take when life is overwhelming.

For more on the original article visit: https://thewestsidegazette.com/how-husbands-can-help-wives-cope-with-miscarriages-depression-and-suicidal-thoughts/