Latosha Hall and Johnny Williams originally met in 2005,  drifted apart for over a decade and reconnected in May 2017. The couple crossed paths again thanks to the groom’s cousin and instantly became intertwined as a couple. By September of 2017, the groom was smitten and asked for Latosha’s hand in marriage. Latosha Hall said yes to the groom and the dress!  The ceremony, witnessed by family and friends, was officiated by Rev. Columbus Burns and Rev. Gary Williams.

The Groom is a retired naval officer who worked as the head chief of maintenance personnel of the Blue Angels flight demonstration squadron and now works part-time at NAS Jax as an aircraft mechanic. Before moving to Jacksonville to become Mrs. Williams, bride Latosha Hall worked as a resort manager in Hilton Head, SC. With a blended family of three children, the couple will reside in Jacksonville. 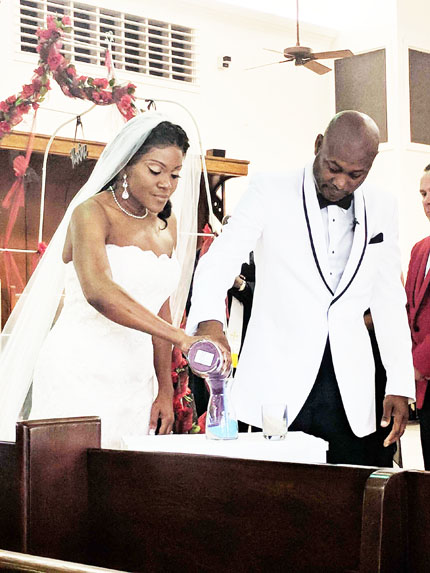