It was a good look. The Florida A&M University Rattlers opened the 2018 football season with a 41-7 victory over the Ft. Valley State Wildcats in the Jake Gaither Classic. The game also marked the first win for new head coach Willie Simmons, and the beginning of the new “Willenium” of Rattler football in front of a crowd of 20,262. With the win, the Rattlers took their first step towards ending six straight losing seasons.

The game was never in doubt for the Rattlers, as they scored their first touchdown early in the first quarter at the 10:50 mark. The Rattler scoring opportunity came after the Wildcats gave them short field after they mishandled a punt attempt on their first possession. The game also saw FAMU kicker Yahia Aly set a new school record by punching through six field goals.

While the FAMU Offense rotated several running backs who combined for 276 rushing yards, sophomore Bishop Bonnett (Raines High School) led the team with a high of 76 yards on eight carries.

“These guys have worked extremely hard since I stepped foot in here in December. They are committed to doing things the right way, and committed to transforming this program to a new level, and they deserved to win tonight,” said FAMU Head Coach Willie Simmons. “I don’t want the spotlight to be about Willie Simmons coming home. The spotlight should be about these guys coming out first home game of 2018, and having a pretty good showing.”

And a good showing it was. All three components of the Rattler attack were working on all cylinders. The Rattler defense held the Wildcats to 14 rushing yards, and sacked the quarterback five times. Included in Saturday’s highpoints was the debut of FAMU’s new Bragg Stadium turf. The new Astroturf was installed in mid-August and as the Rattlers will five more home games this season.

The Rattlers next opponent is Troy State University on September 8, in Troy, Alabama. 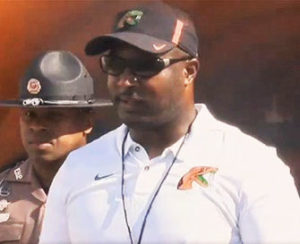