As the nation celebrates Black History Month with observances and activities honoring the historic contributions of African Americans, THE PLAYERS is no exception. This month, THE PLAYERS introduced Foreward Together, a new exhibit that highlights and chronicles the milestones and impact of African Americans in golf. The exhibit, which also highlights Jacksonville leaders’ contributions to the integration of golf, will be on display at TPC Sawgrass during the month of February and will relocate to the atrium of Jacksonville City Hall for display throughout March.

Foreward Together features interactive touch screen displays, timelines and memorabilia from several of the game’s most celebrated legends and industry trailblazers. 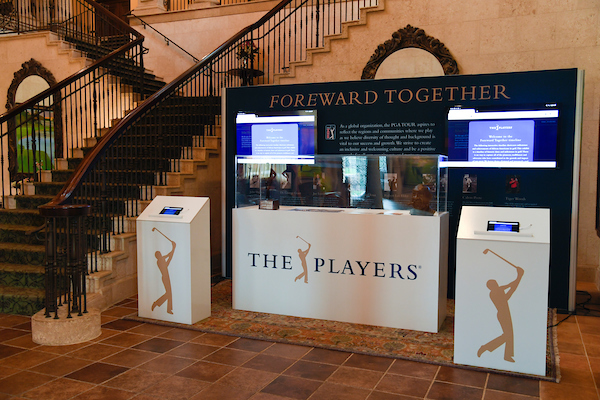 “Calvin [Peete, the first African-American winner of THE PLAYERS Championship] inspired so many young people, especially kids, across the country and across the world to pick up a golf club and start playing this great game,” said Pepper Peete, widow of the late Calvin Peete. “This exhibit is just one way his legacy lives on and future generations can continue to know that golf is a sport anyone can play.”

Foreward Together includes a rich collection of information, stories and items designed to inform and introduce visitors to the many pioneers, trailblazers and advocates who have contributed to the growth and impact of the sport. The origins of the Foreward Together exhibit stem from a Northeast Florida Golf Exhibit that was on display at the Ritz Theater & LaVilla Museum in 2015.

“It’s such an honor to play a part in bringing this exhibit to life,” said Jared Rice, Executive Director of THE PLAYERS. “Golf has such a rich history in our community, and this exhibit – as evidenced by its name – demonstrates our commitment to honoring and building a stronger and more inclusive future.”

“We are honored that THE PLAYERS chose to commission this exhibit and have it on display for all of Jacksonville’s citizens to see and explore,” said Lenny Curry, Mayor, City of Jacksonville. “Jacksonville is home to many African-American trailblazers who worked tirelessly to ensure that the game of golf is more accessible, and this exhibit shines an important spotlight on the leading role our community has played in making sure golf is more inclusive and welcoming to all.”