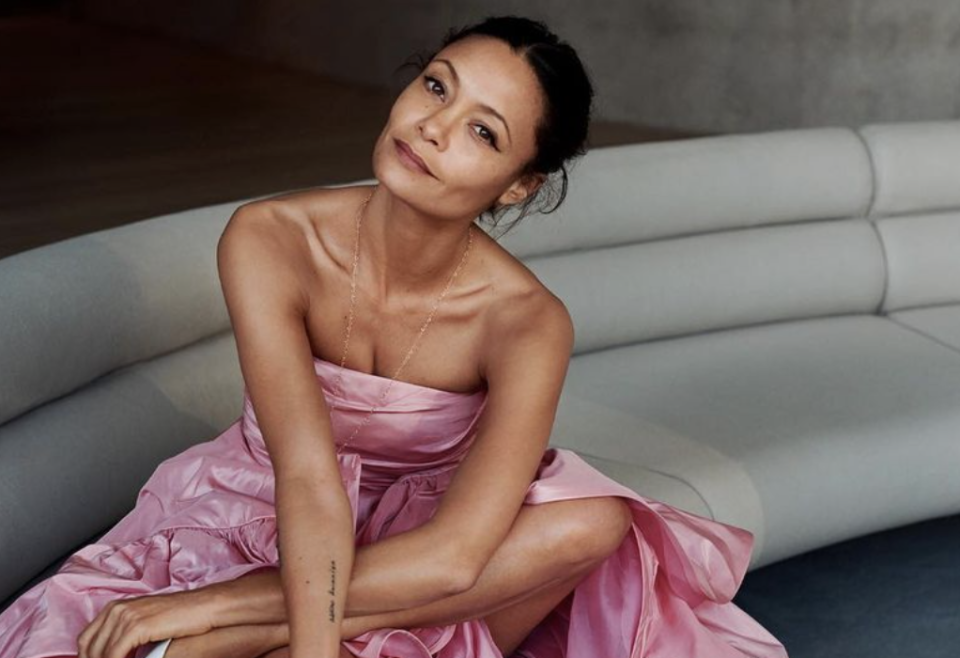 British actress Thandiwe Newton took to Beyoncé’s internet to cry half-white tears to her dark-skinned counterparts for essentially being the chosen one.

While promoting her latest movie God’s Country, Thandiwe, formerly known as Thandie, projected her insecurities about her Blackness onto Black American women and then went full Karen during her interview with the Associated Press.

“My internalized prejudice was stopping me from feeling like I could play this role when it’s precisely that prejudice that I’ve received,” she began. “Doesn’t matter that it’s from African American women more than anyone else, doesn’t matter. I received prejudice. Anyone who’s received oppression and prejudice feels this character.”

“I’ve wanted so desperately to apologize every day to darker-skinned actresses,” she continued. “To say, ‘I’m sorry I’m the one chosen.’”

Then Thandiwe turned on the waterworks as she described her dark-skinned Zimbabwean mother, Nyesha Newton, saying,  “My mama looks like you. It’s been very painful to have women look like my mom feel like I’m not representing them. That I’m taking from them. Taking their men, taking their work, taking their truth.”

For the record, Thandiwe’s husband, Oi Parker, is a whole white man. They’ve been married since 1998.

In another clip, Thandiwe doubled down on her insensate jibber-jabber claiming she was “Black” and “dark-skinned’ in England, but once she came to America, she learned she was “light-skinned.”

If the 49-year-old actress’ goal was to gain understanding, she failed miserably. Though Thandiwe’s half-white tears may move some people, her erasure of actual dark-skinned British actresses is appalling. The Mission Impossible actress seemingly put herself over actresses like Marianne Jean-Baptiste, Michaela Coel, Adelayo Adedayo. Although complexion is subjective, Thandiwe (even with a white British father) isn’t on the lightest spectrum of light-skinned Black folks.

Her insecurities and assigning blame to Black American women for her pain is rich given last year she said, she “didn’t want to be put in a box” over her skin color. Thandiwe also said that she didn’t want to participate in “the objectification of Black people.”

Also, issues of owning her Blackness and how she is perceived by Black people (specifically Black American women since we were the targets of her cryfest and faux apology) seem to be more internalized perceptions than actual experiences. Thandiwe’s name, which she changed back to after using Thandie since 1991, isn’t exactly in Black people’s mouths on a regular basis.

The actress claimed that she became Thandie after her name was misspelled in the credits of an Australian film. However, she let the mistake rock for three decades before she decided to “reclaim” Thandiwe, which means “beloved” in Shona.

In a 2020 interview with Vulture, the “Crash” actress projected her insecurities again when speaking about biracial actress Halle Berry.

She stated that although they both have a white parent, she didn’t feel inclined to post her white father because she wanted Black people to “trust” her.

“All these Black people in the public eye who are Black, and you don’t think about their white parents. Like on my Instagram, it’s always my mum. I don’t put my dad up much, and that’s because I want Black people to feel they can trust me and feel safe with me — that I’m not a representative of this Establishment that degrades people of color. All my f*****g career, I felt like, to Black people, I’m not a legitimate Black person.”

The white woman energy Thandiwe seems to give may be the reason why Black folks aren’t checking for her versus her perceived “light-skinnedness.”

And only a therapist can help with that.