Randy Moss, who was inducted into the Pro Football Hall of Fame, says he received hate mail for wearing a tie with names of black men and women shot to death by police or died in police custody.

During an interview for The Undefeated on ESPN, Moss said on certain websites, people called him a “nigger” and told him to stay in his place. 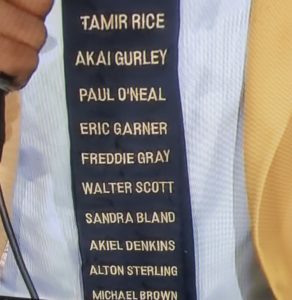 On the other hand, black athletes who played for the NBA and NFL and members of the black community praised Moss for drawing attention the murders of African Americans by police.

Moss played in the National Football League from 1998 to 2012, mainly for the Minnesota Vikings. Moss, a spectacular wide receiver, was one eight former players inducted into the Pro Football Hall of Fame, which is located in Canton, Ohio.