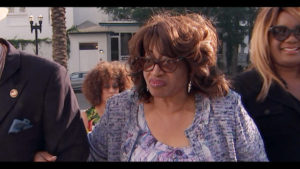 After  15 months since the indictment, three weeks of trial and four days of deliberations, former U.S. Rep Corrine Brown has been found guilty of 18 of the 22 federal charges she was facing in her corruption trial. Charges included mail fraud, conspiracy, and wire and tax fraud.

As she left the courtroom after hearing the verdicts, Brown stoically appeared shocked. The 70-year-old former representative has been released on the terms of her original bail until sentencing, which has not been set. It is speculated it will be in 90 days.

She declined to comment as she left the federal courthouse in silence with supporters including her church pastor and drove away.

Throughout the three week trial,  the prosecution called 41 witnesses, including FBI and IRS agents, former donors, community leaders, and former Brown employees, to prove its allegations that Brown  had a “significant entitlement attitude,” and lived a lavish lifestyle using money stolen from One Door donors, who believed she was helping children with education.

Federal prosecutors said One Door raised $833,000 but gave only $1,200 in scholarships. During closing arguments, Assistant U.S. Attorney Eric Olshan told jurors that the real victims are the worthy students who could have gotten scholarships.

Over several days of testimony, prosecutors documented that at least $300,000 of One Door’s funds paid for receptions, luxury boxes at sporting events and concerts, and trips and expenses for Brown, her associates and family members.

Prosecutors also said Brown claimed on her taxes to have given four times more to charity ($28,000 a year) than she actually gave ($6,600 a year). Several local non-profit CEOs and community leaders were called to the stand all acknowledging they had no ideas of the reported donations.

The government’s star witnesses were One Door director Carla Wiley and Ronnie Simmons, Brown’s former chief of staff. Both took  a one count plea deal and agreed to testify against Brown. They both testified on the stand that they hatched a plan for One Door and stole the money that was supposed to go to scholarships for children.

The trial closed with two days of Brown on the stand, telling the jury the government’s assessment of her financial history was “garbage” and that she “did not steal.” Brown told jurors that her inner circle turned on her, lied to her and all benefited from the deceit. At one point she broke down crying and the jury had to be ushered from the room while she composed herself after crying out “they’re trying to destroy my life” during cross-examination.

Her attorney said after Brown left that he plans to file motions for a new trial, but he would not elaborate on what the grounds for those motions would be.  He also shared a statement from Brown, saying that she respects the justice system but still maintains her innocence and thanked the public for its support and prayers.