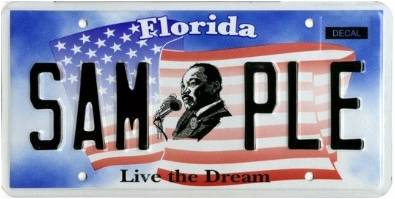 The Dream Foundation, Inc., organization overseeing the nation’s first ever MLK specialty license plate baring the image of Dr. Martin Luther King Jr, has asked Florida Highway Safety and Motor vehicles to stop accepting their fee from the plates new purchase sales as long as it refuses to release sales proceeds to the Sickle Cell Association of Florida.

The MLK “Live The Dream” license plate was created and placed into law in 2004 and is a vehicle to reinvest the purchasing fees back into the community for services specific to the needs of Florida’s African American community. In 2015, the Foundation was the victim of theft by a British American Businessman facing federal charges for the alleged theft, since then proceeds has been withheld and the Sickle Cell Disease Association of Florida has not been able to receive those funds it is due. In the meantime, unbeknownst to them, African American’s continue to purchase the tag and the DHSMV continues to receive its fees from those purchases.

According to The Dream Foundation, “all phone calls have not been returned and we have been utterly dismissed and on one hand, the Governor has honored an African American icon, and on the other hand has shown little regard to the legacy of Dr. Martin Luther King, when April 4th, it will be the 50 anniversary commemorating his death by an assassins bullet,” said Michael Dobson, Dream Foundation President.

“I own one of the plates myself and so does many African Americans in Tampa and all over the state of Florida, and other than myself, they have no idea that what they thought they were investing in, has not gone back into the community, but instead has sat in a trust fund with the state for over three years… for no reason I can see,” said Tampa City Commissioner Frank Reddick who is also the President of the Sickle Cell Disease Association of Florida.

The original sponsors of the plate were former Lt. Governor Republican Jennifer Carrol, while in the Florida House, and the late Senator Larcenia Bullard, a Democrat from Miami. “We and the Dream Foundation board is asking that if the funds are not released, that the state should not get a penny either,” said Commissioner Reddick. Moreover, they are flabbergasted as to why the Department, within its administrative powers, has refused to release the funds so that the program can be back on track. The statute says it can withhold funds if the organization used the proceeds in ways not permitted, but the organization did not do that. What the organization experienced was theft. The Dream Foundation continues to ask why Governor Scott has let this go on and is spreading the word that ‘It’s a slap in the face’ to the black community statewide.