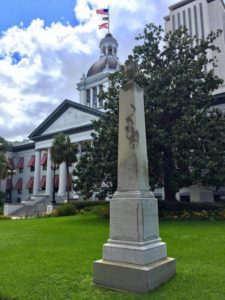 The NAACP Florida State Conference has called on Florida Governor Rick Scott to remove all Confederate symbols at the State Capitol and requested legislative leaders to support a ban from public property statewide. The movement is echoing sentiments nationwide.

“The NAACP is against all forms of hate, racism, and discrimination. With the hatred and pure evil on display in Charlottesville, this movement now appears to have its sights on Florida to incite violence and to create major disruption. It’s time for our Governor, State Senators and State Representatives to show leadership. We are demanding the Governor immediately remove all Confederate statues, flags and memorials from our State Capitol grounds in Tallahassee,”  says Adora Obi Nweze, President of NAACP Florida State Conference and member of the National Board of Directors.

Governor Scott lacks the authority to unilaterally remove the monument, as some elected leaders nationwide have been able to do this week. As a “permanent exhibit of the Florida Historic Capitol Museum,” the monument’s location is under the control of the Legislature, said Maggie Mickler, spokeswoman for the Department of Management Services, which oversees the Capitol grounds.

Sen. Cory Booker (D-N.J.) plans to introduce a bill to remove statues from the United States Capitol honoring Confederate figures despite President Donald Trump arguing that removing them uproots American “culture” and history. There are at least 10 Confederate statues in the Capitol, distributed between the Capitol Visitor Center and other locations, most notably Statuary Hall, where each state chooses two statues to be on display.

Across the United States, roughly 1,500 Confederate symbols still exist on public land more than 150 years after the conclusion of the Civil War, according to 2016 data from the Southern Poverty Law Center. Roughly half of those symbols are monuments and statues. Three in four of them were built before 1950, but at least one in 10 of them were dedicated during the civil rights movement or since the year 2000.

Four Confederate-era monuments were removed last week in Baltimore, Maryland, and the governors of Virginia and North Carolina requested the removal of Confederate monuments in their states.

Links to the confederacy also bear symbolism in the names of schools. In Jacksonville alone, Robert E. Lee High School, J.E.B. Stuart Middle School, Stonewall Jackson Elementary, and Joseph Finegan Elementary, are all named after Confederate Generals. Jefferson Davis Middle School is named after the President of the Confederate States. Westside High School, formerly Nathan B. Forrest High School, underwent a name change after a decade long fight to change the name from that of the former Klan leader.

An analysis has found that at least 191 K-12 public schools are named after Confederate soldiers, leaders or politicians. This number is slightly down from recent years. In 2015, that number was at least 195.

“We call on all members of the Florida Legislature to stand together and to end the bigotry that has divided us for too long and support a bill banning all Confederate statues, flags and memorials from public grounds across the State of Florida. We are and will continue to be steadfast and immovable in the fight against discrimination, prejudice and hatred,” said Nweze.