#NNPA BLACKPRESS  NNPA NEWSWIRE — By Dwight Brown NNPA NewsWire Film Critic – John David Washington has crossed a bridge. He’s no longer just the son of a superstar actor. He is a superstar actor. Seconds after he’s on screen, you get the deal. He is as confident, adventurous and acrobatic as Tom Cruise in the Mission Impossible series. As cool and debonair as any of the Bond men. As his character becomes more poised and powerful, you become more assured that you are watching the blossoming of an actor who can dominate scenes that should have been stolen by veterans like Kenneth Branagh and Michael Caine.

Warner Bros delayed the release of Tenet during the pandemic until it could open it in theaters. It was a wise decision. The film belongs on a big screen. In fact, for maximum effect, viewers should consider experiencing the movie in an IMAX theater.

A sinister group of commandos takes over an opera house, holding the audience hostage and preparing to blow up the place. A counter group of combatants intervenes. One of the potential saviors is known simply as the Protagonist (John David Washington, BlacKkKlansman). As he tries to thwart mass murder, he notices a curious event. A hole in the side of a seat seems to refill itself with debris. At first, it seems like a minor occurrence. Then he realizes that it’s an example of a bizarre force. A reversing of the flow of time. Like a bullet reentering a chamber after it’s been shot from a gun. In the wrong hands, it’s a power that can become lethal.

This “time inversion” phenomenon comes under the watch of a secret organization dubbed Tenet. Quickly Protagonist finds himself embroiled in global intrigue, a dark underworld that includes arms dealers, physicists, mad scientists and people eager to end humankind. His quest to save the human race takes him to London, Mumbai, Oslo, Southern California… 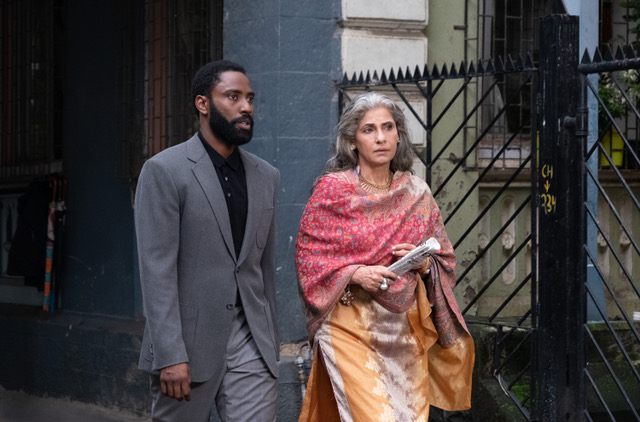 To get audiences in the mood for a mind-boggling spectacle, the production design (Nathan Crowley, The Dark Knight) and sets are never less than awe inspiring. The film rarely loses its rhythm (editor Jennifer Lame, Before the Devil Knows You’re Dead), and when it does it’s because the script with its occasional over-abundance of expository dialogue slows things down. The special effects wizardry (special effects: Kevin Bitters, Beasts of No Nation; visual effects Reetu Aggarwal) involved in making cars uncrash, bombs unexplode and characters eye themselves from other time periods are graphic enough to drive you batty!

The film’s sound (Angela Ang) is a very key and domineering element. Like the noise in A Quiet Place, it almost should get third billing. At times it is scary and energizing. At times it feels like the cast is shouting over it, to the point that you can’t always discern what they’re saying. The same goes for the musical soundtrack, which is entrancing quite often, but loud at times when it shouldn’t be. Regardless, whether they’re near a plane crashing, a building imploding or a gunfire in the distance, audiences can hear and feel what the characters are experiencing in the most penetrating way.

John David Washington has crossed a bridge. He’s no longer just the son of a superstar actor. He is a superstar actor. Seconds after he’s on screen, you get the deal. He is as confident, adventurous and acrobatic as Tom Cruise in the Mission Impossible series. As cool and debonair as any of the Bond men. As his character becomes more poised and powerful, you become more assured that you are watching the blossoming of an actor who can dominate scenes that should have been stolen by veterans like Kenneth Branagh and Michael Caine.

Robert Pattinson adds a very mysterious element. You’re not sure if you can trust Neil, because the actor adds a dubious twist to his performance. Debicki makes an alluring Kat who plays it vulnerable one minute, but brave enough in a second to kill anyone. Her flirtations with Washington sizzle. Branagh couldn’t be deadlier as Andrei. The rest of the international, multicultural cast is a pleasure, and are dressed like they belong on a runway (costume design Jeffrey Kurland, Dunkirk).

As a director, Christopher Nolan is both an artist and a visionary. Whether you like or dislike his movies, his skills and taste in composition, lighting, staging, segues, drama, action scenes and big dreams are impeccable. His ability to pull performances out of his cast that fit the canvas he’s created is unapproachable. He has few peers in the industry. The flow, choreography, timing—he approaches it like an engineer building a race car.

Nolan’s scriptwriting is innovative too. The film’s concept and his ability to wrangle the most absurd or obtuse notions of physics into a plausible plotline is amazing. If anything, it’s overly ambitious. There is no way audiences will have a full understanding of the science behind the time inversion concept and how objects can go backward or what “effect before cause” can really mean. It’s too complicated. Even with Priya and others explaining its intricacies, the details and data become a blur. It would take a semester at MIT, and not a 180-minute movie, to clear things up. The magic of the odd power is on view. The script should have explained it loosely, a couple of times, and then let the visuals do the hard work. Let the audience perceive what they wish to perceive.

Some movie fans are still skeptical about venturing into a theater to see gems like Tenet. Those fears are basic survival instincts kicking in during a very unpredictable pandemic. That said, the ideal way to watch Christopher Nolan’s extraordinary but flawed sci-fi/action/thriller and John David Washington’s brilliant performance is on a screen the size of the Titanic.

For more on the original article visit https://blackpressusa.com/film-review-tenet/