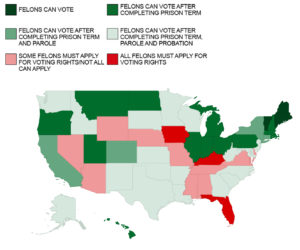 With the 2016 Presidential election around the corner on November 8th, The Sentencing Project is reporting that 6.1 million individuals will be prohibited from voting because of felony convictions and most of them are African American.

Felony Disenfranchisement rates vary from less than .5 percent in Massachusetts, Maryland, New Hampshire, North Dakota, Oregon, Rhode Island, and Utah. It is zero percent in Maine and Vermont to more than 7 percent in Alabama, Florida, Kentucky, Mississippi, Tennessee and Virginia.

In April, Virginia Gov. Terry McAuliffe restored voting rights for 206,000 ex-offenders, but the Virginia Supreme Court in a 4-3 decision issued in June ruled that McAuliffe did not have the authority to make such a proclamation. In August, Gov. McAuliffe said his office will issue voter restoration orders on an individual basis to Virginians who have completed their sentences staring with 13,000 residents who had their registrations cancelled.