TIAA Stadium was packed to capacity for last week’s season opener against the New Orleans Saints. Several backups on the Jacksonville Jaguars excelled despite the loss, Jags 20, New Orleans Saints, 24. Backup quarterback Cody Kessler played well under pressure. The QB’s 121.1 passer rating when under pressure ranked fourth among QBs. He went six of nine with one touchdown.  Jaguars running back Corey Grant looked elusive on the field, on his 11 touches he forced three missed tackles, two of which came on his three receptions.

Prior to the start of the Jaguars’ preseason home opener,  four prominent Jacksonville players decided to stay in the locker room during the singing of the national anthem. Pro Bowl linebacker Telvin Smith, All-Pro cornerback Jalen Ramsey, former first-round pick Leonard Fournette and fourth-year running back T.J. Yeldon were not on the field with their teammates during the anthem. The group’s decision to elude the on-field presentation comes after months of controversy regarding the handling of anthem protests. Shown are fans Tyesha Daily and Kim Jefferson. Barlow Photo 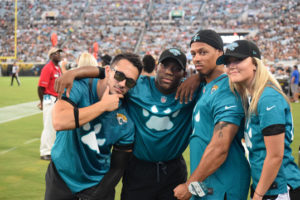