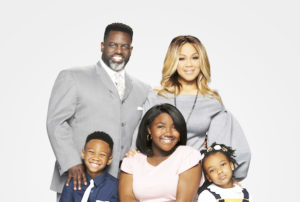 by Jeannie Law
TV One is gearing up for the premiere of “We’re the Campbells,” a new reality series featuring one half of the gospel group Mary Mary, Erica Campbell, her husband, world-renowned music producer and pastor Warryn Campbell, their children and extended family. The series will show the realities of parenting in this day and age, how they work to keep their love strong after infidelity and more.

“We’re the Campbells,” which begins June 19, is a nine-episode docu-series that will give viewers an intimate glimpse into the lives of the Gospel entertainment power couple and their three children Warryn, Zaya and teenager Krista.
Campbell, who has been on reality TV before with her sister Tina, said that in this new show, viewers can expect to see a “real family,” a couple raising kids, trying to stay in love, and managing music, church and their careers.

“I know a lot of times you actually don’t see the kids and the issues, but we’re really tapping into what happens with kids — feeling accepted, colorism, self–acceptance — all the while trying to manage our faith, our family,” the Grammy Award-winning songstress said.

“I love my relationship with my kids and we know that it mirrors a lot of other people’s relationships. A lot of other parents are trying to figure out how to deal with these things. We’ve been given a platform and a voice of influence and that’s a blessing, so it allows us the opportunity to share our experience with other families giving them something to watch together.”

Campbell said families usually have programs that the adults watch separately from their children and vise versa but “We’re the Campbells” is a show that the entire family can enjoy together.

“Not only is it answering life questions, cultural questions but it gives them something to do together,” she added.
When asked about the pressure they face while parenting in the public eye in their upcoming series, Campbell said they do not worry about being politically correct. They tackle racism, self-acceptance, bullies and how to respond and “rise above.”

“Truth does sting but when truth is wrapped in love, you can always at least listen to it. And it makes it open for conversation when the truth doesn’t come with judgment or condemnation. I tell my kids all the time we can discuss anything, I can always deal with the truth but I could never deal with a lie. So we deal in truth and hopefully, people can see and understand and respect that.”

In a clip that aired on the Own Network’s “Black Love” in September 2017, Campbell and her husband opened up about a time when his “selfish behavior” led him to cheat on his wife. Warryn is an award-winning music producer for some of today’s most influential artists, a pastor of the California Worship Center and founder of the record label My Block Inc. The couple managed to get past that hard season of their marriage and the singer revealed that their new show will show how their bond is now better than ever.

“I hope that viewers see real love, communication, honesty, growing past and even falling deeply in love of each other because of a different level of honesty,” Campbell said of her marriage. “None of it can happen without forgiveness and because we are believers I have to lean on how would Jesus handle it.”

“Am I adhering to what I ask God to forgive me for? That’s what love is supposed to do. Even in a relationship, it’s sometimes the last thing we want to do. But I can’t feel justified as a believer asking God to give me something that I’m not willing to give. So I’m hoping that’s what they see,” she added.

The happy couple no longer live their lives in the past because they hold to the Bible verse found in 2 Timothy 1:7, which says fear does not come from God.

Campbell said from here on out she will be focusing on the series, her family, serving as first lady of the family church, as well as her new book, which will promote her hair extension and wig collection.