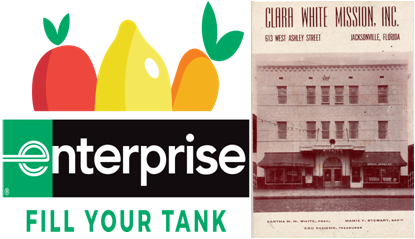 The Enterprise Rent-A-Car Foundation will present a gift of $21,000 to the Clara White Mission at the 23rd Annual “Thanksgiving Breakfast”, on Thursday, November 28th. The Thanksgiving Breakfast is scheduled from 7:30 a.m. to 9:30 a.m. at the Clara White Mission, 613 W. Ashley Street. In addition, Enterprise Rent-A-Car employees will serve Thanksgiving breakfast to homeless veterans and low-income families. The donation is part of Enterprise’s Fill Your Tank program, which launched in October 2016 to mark Enterprise’s 60th anniversary by providing $60 million to fight hunger globally.

Now in its fourth year, the Fill Your Tank program has distributed a total of $40 million among larger food banks and charities throughout North America and Europe, in addition to smaller local food banks and pantries in North American communities. The Fill Your Tank program donations made locally are determined by regional Enterprise operations, and this year $5 million was distributed to food banks and pantries throughout communities served by Enterprise.

In presenting the donation, Todd Broadwater, Group HR Manager for Enterprise in Jacksonville, said, “We are proud to support the Clara White Mission in its mission to fight hunger in Jacksonville. Since the Fill Your Tank program launched in 2016, we have been committed to addressing food insecurity around the globe and making a difference in the communities where we live and work.”

Ju’Coby Pittman, CEO/President of the Clara White Mission, said, “This gift comes at a critical time, when many residences are facing the silence of hunger. This support from the Enterprise Rent-A-Car-Foundation will help the mission in strategically providing daily meals to families that are in need in our community. Together, we are asking the community to join us in making an immediate and visible difference by giving back to low-income who find it difficult to make ends meet, and homeless veterans who are facing hunger, especially during the upcoming holiday season.”

Although there is enough food produced to feed the population, one in nine people still go to bed on an empty stomach, according to the World Food Programme. In the U.S. alone, 37 million people face hunger, including more than 11 million children, according to Feeding America. More information can be found at www.enterprise.com/FillYourTank (U.S) or www.enterprise.ca/FillYourTank (Canada).

The Mission is a one-stop community development center that restores lives through job training, job placement, housing initiatives and daily meals.  Last year, the Mission served over 130,000 meals. The Clara White Mission has been a beacon of hope for the needy of Jacksonville for 116 years.  Clara White is opening its door again to welcome in individuals seeking a hot breakfast this Thanksgiving Season.  Clara White Mission welcomes anyone who wishes to join their “mission” and volunteer their time.  Clara White is also accepting canned food and non-perishables for their holiday food drive for veteran families.  Items can be dropped off at 613 W. Ashley St., Jacksonville, FL 32202.  For more information on other ways to contribute, visit www.clarawhitemission.org or call us 904-354-4162.