LOUISVILLE, Ky. (WDRB) — Jamarcus Glover, the focus of a series of Louisville police raids, including one in which officers shot and killed Breonna Taylor, was offered a plea bargain last month if he would say that Taylor was a member of his “organized crime syndicate,” records show.

As part of the July 13 offer, Glover was to acknowledge that over a period of time through April 22 he and several “co-defendants,” including Taylor, engaged in organized crime by trafficking large amounts of drugs “into the Louisville community.”

Glover, a convicted felon with a history of drug trafficking, turned down the plea offer from the Jefferson Commonwealth’s Attorney’s office. It would have resulted in a possible 10-year prison sentence on charges of criminal syndication, drug trafficking and gun charges.

If he had taken the plea, Glover could possibly had been released on probation instead of serving prison time. That decision would have been up to the sentencing judge. 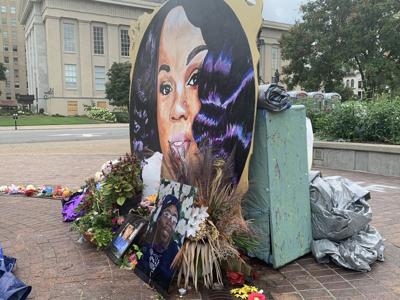 e syndicate organization, according to the plea offer obtained by WDRB News, sold drugs mainly from abandoned or vacant houses on Elliott Avenue in the Russell neighborhood.

Taylor lived about 10 miles away in an apartment on Springfield Drive.

Attorney Sam Aguiar, who represents Taylor’s family in a wrongful death lawsuit, claims the plea offer shows “the lengths to which those within the police department and Commonwealth’s Attorney went to after Breonna Taylor’s killing to try and paint a picture of her which was vastly different than the woman she truly was.

“The fact that they would try to even represent that she was a co-defendant in a criminal case  more than a month after she died is absolutely disgusting.”

Defense attorney Scott Barton, who represents Glover, said he received several plea offers from prosecutors. Although one of them contained Taylor’s name, the most recent offer and others did not, he said.

Commonwealth’s Attorney Tom Wine said in a statement that the offer that included Taylor was a “draft” and part of negotiations with Glover and his lawyer.

Wine said his office was aware of information, including jail phone calls, in which “Mr. Glover implicated Ms. Taylor in his criminal activity.

“When I was advised of the discussions, out of respect for Ms. Taylor, I directed that Ms. Breonna Taylor’s name be removed. The final plea sheet provided to Mr. Glover’s counsel is attached and clearly does not include Ms. Taylor as a co-defendant,” he said.

Wine said Glover’s final offer was withdrawn after he failed to surrender to the court.

Wine also criticized Aguiar, who posted a screenshot of the plea deal on Facebook on Monday, and reiterated that it was a “draft.”

In response, Aguiar said the plea isn’t characterized as preliminary and is “literally a verbatim recitation of the plea sheet that list her under co-defendants.”

The plea “was obviously presented to Glover and his attorney,” Aguiar said.

Other attorneys who spoke to WDRB News about the issue said all plea offers are drafts until they are signed.

Louisville defense attorney Ted Shouse, who formerly worked for the Kentucky Innocence Project, said the strategy seems to have been to destroy Breonna Taylor “because she is destroying them. And they want Jamarcus Glover to do it for them because their efforts have failed. So they offer him a bribe, basically. All you have to do is smear her.”

In the final version of the plea offer, according to Wine’s press release, Glover still was to state that co-defendants used Taylor’s apartment to store “proceeds from the trafficking operation.”

The plea agreement also called for Glover to acknowledge that the person living at Taylor’s apartment was “handling all his money.”

Glover has said repeatedly in recorded jail phone calls and an interview with The Courier-Journal, that Taylor, a former girlfriend, was not involved in any drug operation and questioned why police would raid her home.

In one recorded jail call, Taylor said officers “didn’t have no business looking for me at no Bre house.

Lee said in a recorded jail phone call that “It ain’t got nothing to do with them up there, nothing.” In another jail phone call, Bowman claimed “the money is in her name,” referring to Taylor.

Police sought out a search warrant for Taylor’s home as part of a broader investigation that focused on drug suspects Glover and Adrian Walker. Police believed Glover may have been using her apartment to receive drugs and store money.

Glover also used Taylor’s address as his home address on bank statements and was observed by police picking up a package from her apartment in January before driving to a “known drug house,” according to the search warrant affidavit.

Police shot and killed Taylor during an undercover raid on her apartment near Pleasure Ridge Park. She was struck five times, according to her death certificate.

Her boyfriend, Kenneth Walker, admitted to firing at police as they entered the apartment but claimed he believed the officers were intruders. He allegedly struck Officer Jonathan Mattingly.

In the search warrant affidavit filed before the raid of Taylor’s apartment, police said they believed Glover could be keeping drugs and money at her home.

In a jail call after the raid, in which Glover said Taylor was “hanging onto my money” for him, he claimed she had about $14,000 – and that he could walk into her home and find it.

“She had the eight I gave her the other day … and she picked up another six,” Glover told an unidentified man.

And Glover did say, while trying to find enough money to post bond, that Taylor was “hanging onto my money” for him, according to the phone calls obtained by WDRB.

Aguiar said the two dated until mid-February and “just because a woman has an off-and-on relationship with a bad guy doesn’t mean she deserves a death sentence, or give law enforcement a reason to beat down her door in the middle of the night with no probable cause,” Aguiar said.

And Aguiar noted that no drugs or money were found by police at Taylor’s home.

A search warrant from March 13 that shows items police seized from the apartment — such as cell phones and shell casings — does not list any money or drugs.

Glover later told his girlfriend that he was giving money to Taylor for a phone bill.

In another phone call he made from jail on the same day, Glover told his sister that another woman had been keeping the group’s money.

Glover asked why, if police had been watching him before the arrest, as he claims officers told him, they raided Taylor’s home close to 1 a.m.

Glover insisted that the only thing tying him to Taylor was that she had bailed him out of jail previously.

The discovery in the Glover criminal case includes a police risk assessment of a raid of Taylor’s home, which evaluates factors such as weapons, lookouts and the criminal history of people believed to be inside.

The Springfield Drive apartment was given a 15, making it “low risk.” Officer Mattingly told police investigators after the shooting that Taylor was a “soft target” who was thought to be alone in her apartment. Another home raided that night on Muhammad Ali Boulevard, for example, had a score of 88.

This story may be updated.

Correction: An earlier version of this story described the plea offer involving Breonna Taylor as a court document. It was a draft presented to Jamarcus Glover and his attorney but, because it was not accepted, did not become an official record in Glover’s pending criminal case.

For more on the original article visit https://www.wdrb.com/in-depth/drug-suspect-offered-july-plea-deal-if-he-would-admit-breonna-taylor-part-of-organized/article_df18d6e0-ebaf-11ea-b636-9ff3afe1f8ed.html